I think that God is trying to teach me patience.  It's not that fun a lesson.  I'm really, really, really not patient.  Motivated? Yes. Driven? Yes.  Hard-working? Yes.  Not patient.  But I'm going to have to find some patience while Clara learns to eat, because this part of the journey is not going to be fast or easy.  I know that we've only been trying for a few days (three, to be exact) and that it may take many, many days or weeks before she figures it out, but it is enormously frustrating.  My whole life I've thought if I just worked hard at something and really gave it a good effort and planned enough and was motivated enough, I could achieve anything.  Guess what doesn't work that way?  Trying to teach a six week old how to eat for the first time.  There's nothing I can do to make her re-learn that sucking reflex that she hasn't needed for the past six weeks and doesn't really have any more.  Thank goodness Martha (the lactation consultant) is patient enough for both of us because we spent a lot of time today trying to convince Clara that my milk would be yummy.  Without going into more details about my boobies than you really want to hear I'll say that she's not rejecting the breast, she's just not really latching on and sucking either.  We stopped her continuous feeds for three hours this afternoon in hopes that she'd be hungry enough to want to eat, but apparently she's not as motivated as I am.  Three failed attempts today have me a little frustrated, disappointed and discouraged.  But I will not give up!  Enter: patience.  Here we go.

That was the bulk of our day today.  Aside from trying to eat, Clara got to enjoy a long snuggle time with her Big Daddy this morning and her Daddy this evening (and Mommy in between, of course).  We're still weaning the sedatives (today it was the Versed) and we're starting to see some of the signs of narcotic withdrawal: yawning, sneezing, and vomiting (twice yesterday and twice today).  She was also a little fussier this afternoon than she has been, but I'm not sure how much of it was just six-week babies are fussy and how much of it was withdrawal.  Since we're not completely sure if the spit up/vomit is withdrawal or acid reflux we have added Prevacid to her list of drugs and acid reflux to her list of diagnoses (we resolved chylothorax and pleural effusion today, so it was a two for one trade off at least!).  Her chest x-ray looked better today than it has in several days, so hopefully some of the fluid is leaving her lungs.  We're going to work on weaning the flow of her oxygen.  She was at 3 liters, and we turned it down to 2 liters today and she has tolerated that wean just fine.  Hopefully we can continue to wean that flow over the next several days; she can go home on oxygen if need be, but not at these flow levels (and we're prayerful that she won't need to go home on it at all!)  Tomorrow is another change in attending physicians, we'll be back to Dr. Yang for the next two weeks.

The things we need to pray for are:
- FEEDINGS (both for Clara's health and for Mama's sanity.  Please pray that she'll figure out this whole eating thing.  Preferably sooner rather than later.)
- Tolerating the wean of flow on her oxygen cannulas and that she will be able to be all the way off in time for her to come home without that support.
- A successful transition off of her narcotic drugs without the difficulty of painful or uncomfortable side effects.
- Acid reflux (If the spit up/vomit is acid reflux, we are prayerful that the prevacid will treat it.  Most CDH babies do have acid reflux, but since she's now receiving all her medications in oral form, spitting up and vomiting means we're losing some meds and it's hard to determine exactly what or how much.  Please pray that we won't have any more episodes of that...)
- Protection from other illness, complications and setbacks.  Our momentum may have slowed a little, but let's pray that it keeps going in the right direction!
- Another smooth transition in change of care

My camera battery died today.  Apparently you have to charge it after 43 days.  But here are a few shots I got before it puttered out on me: 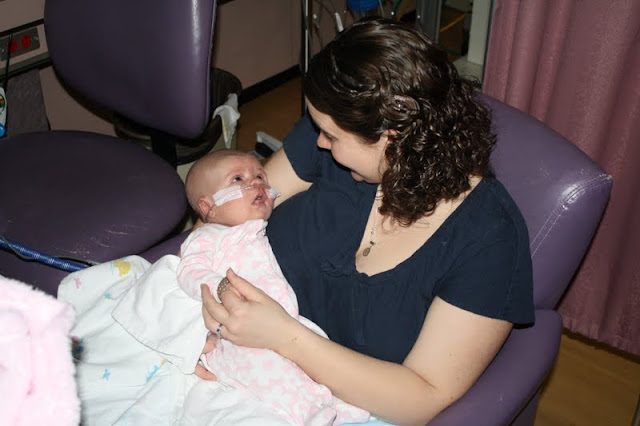 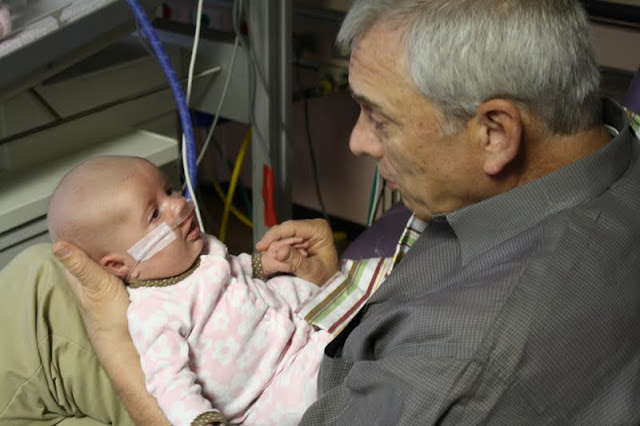 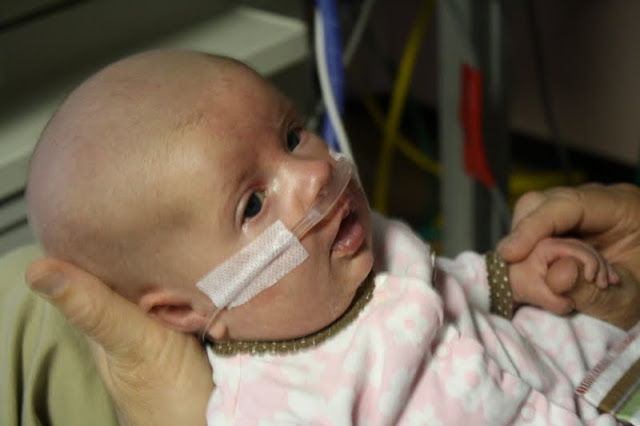 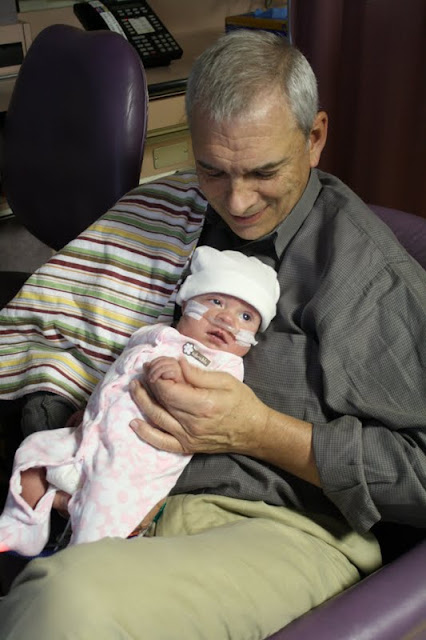 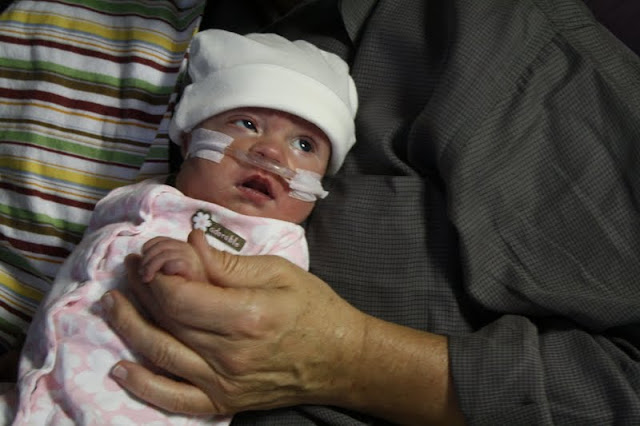 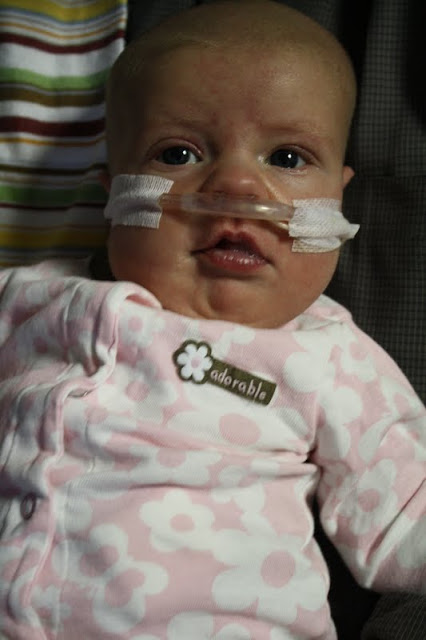 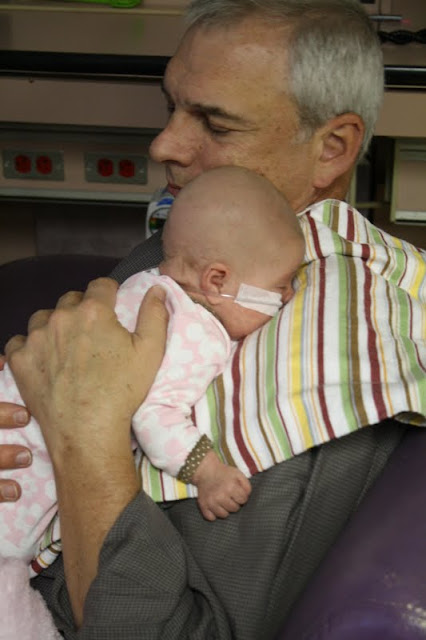 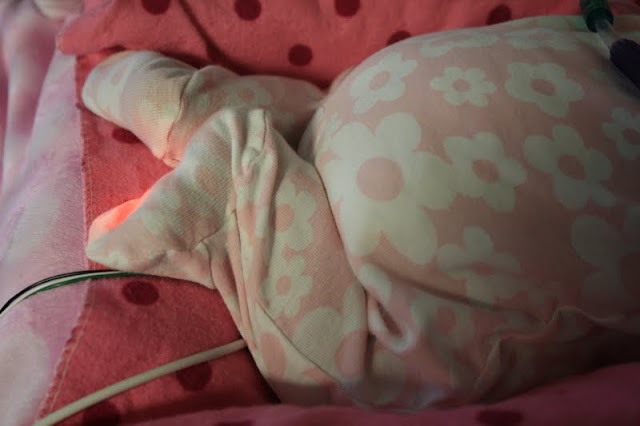 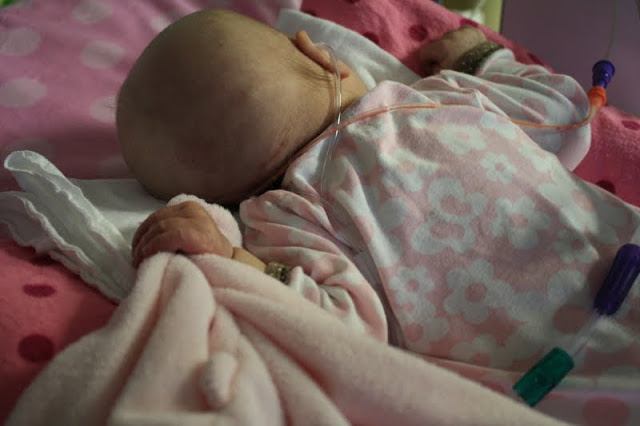 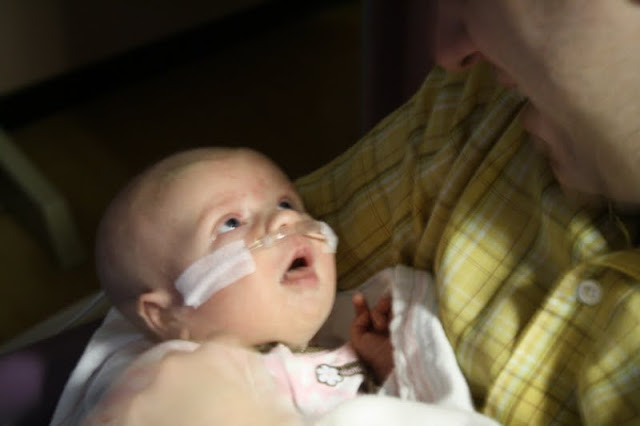 But hope that is seen is no hope at all. Who hopes for what they already have?  But if we hope for what we do not yet have, we wait for it patiently.  Romans 8:24-25