I'm sitting by Clara's bed and she's sleeping peacefully in my lap. Since I'm not sure when I'll be leaving here tonight (they're very short staffed and I don't really like leaving her when things are this busy) I thought I'd just update you from my phone.

Clara has made great progress the past couple of days on many fronts. She breastfed yesterday for 20 minutes in the morning and another 10 in the afternoon for an estimated total of about 2oz. We have also condensed feeds to one hour (instead of continuous). Yesterday we weaned her ativan dose; today we weaned the morphine dose and went to prn or "as needed" for her ativan instead of an automatic dose every 8 hours. She breastfed again twice today.  Her oxygen flow is down to 0.9 liters or 900cc.  The FiO2, or percent oxygen has been consistently below 30% and she's had a couple of runs at 21%.  So we've made good progress on all 3 fronts and are so proud of her and thankful for the physicians and staff and most of all our Lord.

On Monday we started to see a small amount of blood in her stool. She was not uncomfortable or unhappy so we just stopped her supplemental protein and decided to watch it.  Yesterday the blood increased in frequency and today it increased in quantity. The initial thought was (is?) that she might have developed a lactose intolerance.  We started a formula to see and I've stopped drinking/eating milk so that if that is it we can resume breastmilk in a little while.  The blood is continuing to get worse and she threw up almost half of the formula (this baby likes mama's milk).  They ordered an abdominal xray to see if there's anything else going on.  They're also going to do some labs to check for any infection. In the meantime they've stopped feeds completely overnight and are going to give her fluids which unfortunately means a new IV.

We are praying that the bloody stools resolve quickly and that the doctors are able to solve this puzzle. She doesn't act sick or uncomfortable or anything. As hard as it would be for me to stop all dairy I'll be willing to do it if it will make her better. But my gut feeling on this is that it isn't lactose. I'm not sure what it is but I just really hope she'll be okay and that this is a small setback and not a big one.

They just did a heel stick to get blood for labs and Clara really hated it. Lots of tears from her and a couple from mama too.  We gave her her morphine (*after* the heel stick... bad planning) so hopefully that will kick in a bit before we have to stick her again for IV access.

Robert is out of town tonight for work and I'm not leaving tonight until things are more stable around here.  They're short two nurses and even though Clara is a little sick for Clara right now she is one of the healthiest and most stable babies in ICU.  So that means Clara isn't getting much attention from the nursing staff (rightly so).  Good thing I've learned a lot about nursing the last eight weeks.  I'll just take care of her.

Thank you for praying for our baby. I'm still so thankful for how well she is doing,  even after a difficult afternoon.  I know that God has begun a great work in her and that He will see it to completion in His way.  Indeed we have much to be grateful for. 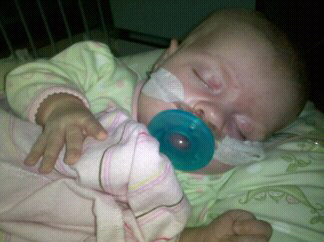