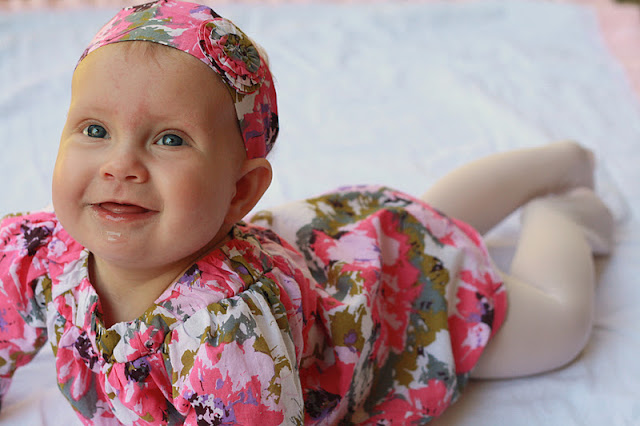 Clara turned seven months old today.  Our little girl is so full of personality, energy and love.  Every day is such a gift with her and I try to soak up every last moment, for they are already passing too quickly.  Here’s some of what’s happened in Clara’s seventh month!

Clara…
- is sitting up for long periods of time now and it’s her favorite position to be in.  She will also lunge forward, and pull herself back up to sitting or pull herself out of sitting and onto her tummy.
- continues to do physical therapy - lots of baby sit-ups and tummy time to strengthen her core.  She’s getting stronger every day and is getting better control and balance, too.  She doesn’t mind being on her tummy anymore…
- continues to roll all over the place and loves getting around.  Crawling won’t be too far off; she’s scooching (is that a word?) her knees when she’s on her tummy and trying to figure it out.
- went to the library for the first time.
-  really got on a great schedule this month with three naps most every day.  She’s just in the past week or so been hinting around that she might like to drop that third nap (*sniff*)….
- loves being on her feet.  She still really loves her doorway jumper and bounces and laughs and grins like she’s on cloud nine when she’s in it.  She also loves to practice standing by holding on to our fingers.
- does a great job of reaching towards and raking her toys and is still putting everything in sight in her mouth.
- hung out with her cousin.
- is beginning to recognize her name (I think… sometimes…)
- started taking five ounce bottles!
- gave up the swaddle at night time and is transitioning out of it for naps, too.
- went to the mountains twice where she visited an apple orchard and went to her first Woolly Worm festival.
- helped host her first Hardy Hootenanny (more to come on that in another post soon)
- fought fought fought her mama on eating solid foods, and won.  I only make her do it a few times a week right now; it’s just not pretty.  She especially hates spoon feeding, but will gum a whole banana quite contentedly.
- smiles when I hold my camera or cell phone up at her (you think she’s photographed much?...)
- still doesn’t have any teeth, but her drooling has picked up considerably (see photos below), as has her biting and gnawing.  I think she might be working on a couple, but who knows…
- got some honest to goodness fat rolls.  We haven’t weighed her in a month (we’ll have a doctor’s appointment tomorrow, so we’ll get one then), but she’s very solid and very strong.  There are little dimples in her knees and her chubby cheeks have gotten even chubbier.  Never been so grateful for chub.
- keeps babbling.  We’re working hard on “mama” and “dada” and “puppy”, but still only have /g/ as her single consonant…


She just plain “seems big.”  The past month or two have brought her fully out of the infancy stage and into the baby-on-the-go stage.  Snuggles only happen when she’s eating and sleeping now and she is interested in checking out everything around her.  She’s very social and not afraid of strangers.  She almost always has a smile on her face and is very easy-going.  We’re thankful for such a happy baby who reminds us to be filled with peace and joy, too.
Clara pooped through the first outfit I had on her today, so after a wardrobe change we quickly snapped these seven month photos.  Enjoy these shots of our little ham. 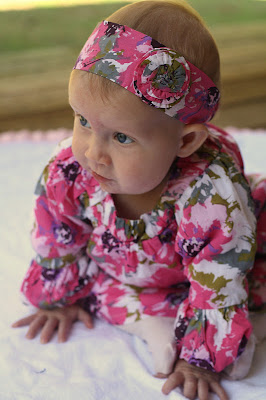 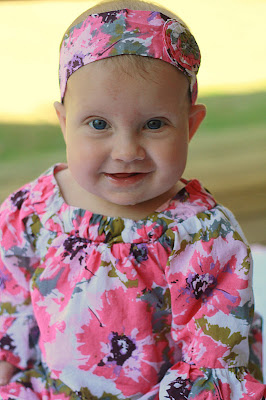 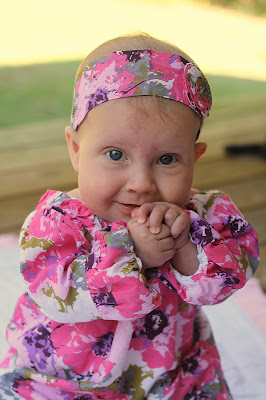 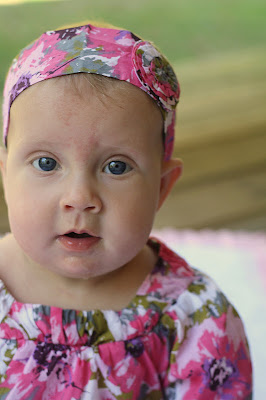 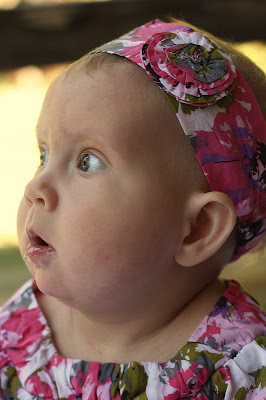 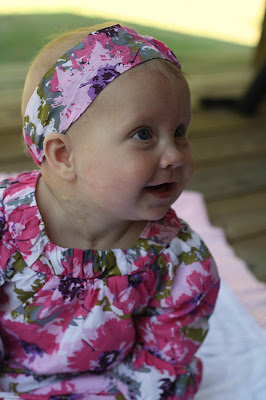 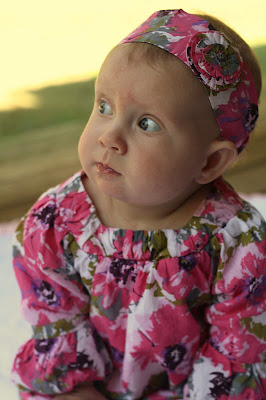 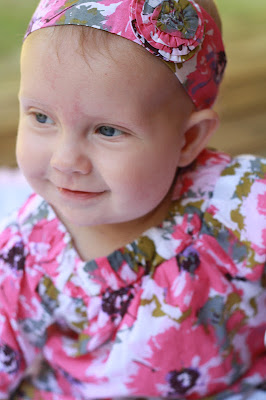 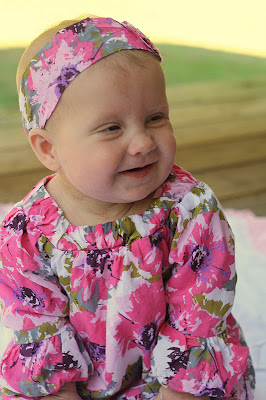 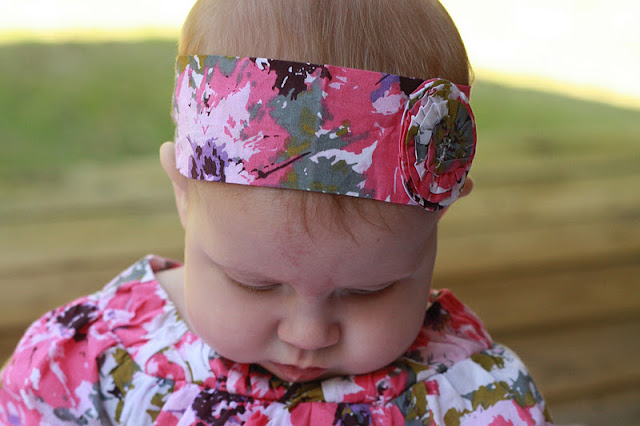 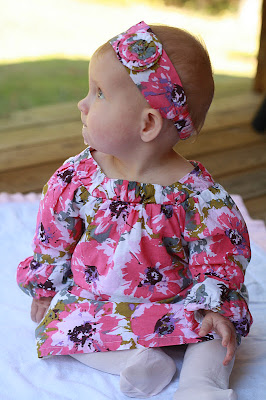 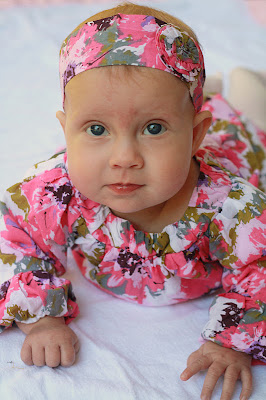 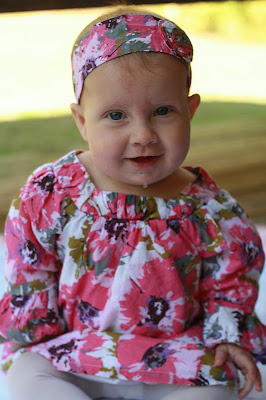 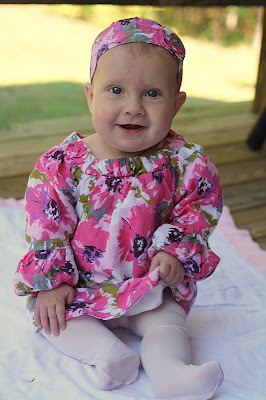 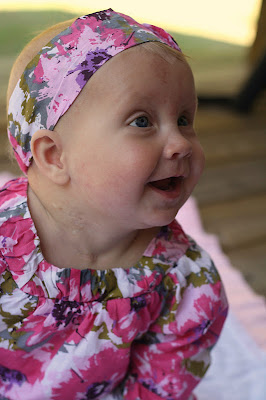 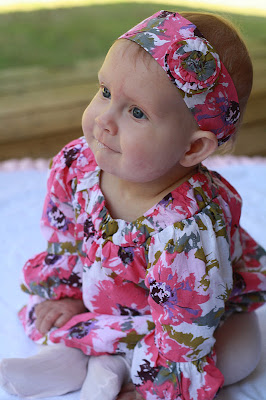 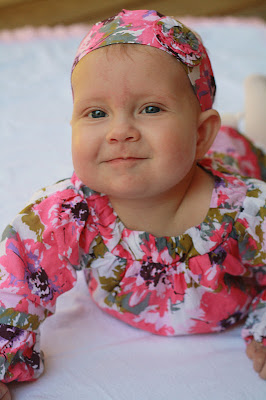 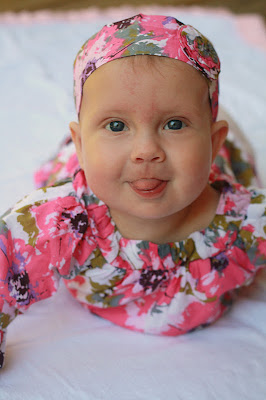 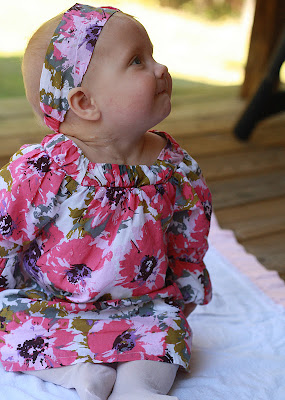 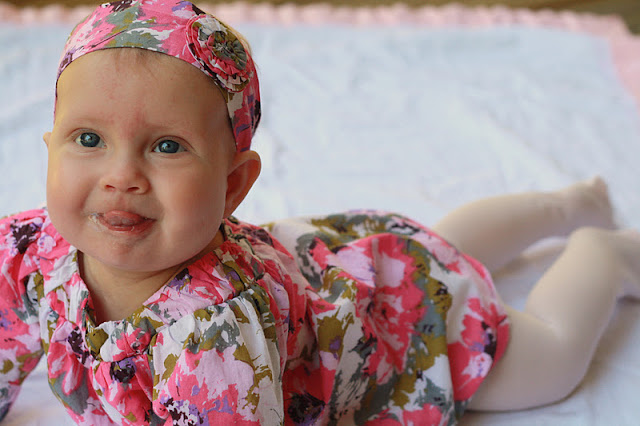