It's been a busy Monday of doctors' appointments, but we have more good news to report.  This morning we met with the cardiologist and had an echo done to evaluate the state of Clara's pulmonary hypertension.  The drug sildenafil that Clara came home on is to treat pulmonary hypertension and we were told to expect her to stay on this medication for many months since most of these babies still battle varying degrees of pulmonary hypertension for quite some time.  Last week when we pulled out the NG tube and had to begin giving this medication orally I had a small panic attack.  Clara was spitting it out and we were having a horrible time trying to get it in her.  I called cardiology in a tizzy last Thursday, begging to drop one of the three doses and asking about the repercussions of her missing the doses that she either spit up or threw up.  They told us just to do our best over the weekend and we'd re-evaluate on Monday at the appointment.  Today, we were so pleased to hear that her echo looked completely normal.  [SIDENOTE: It was so fun to see some of the sonographers we loved and saw every day for awhile when Clara was so very sick.  One of them scooped her up today and started parading her around the office saying to anyone who would listen, "This right here is a MIRACLE baby!  Look at this baby who lived because of love and prayers!  Let me show you this incredible miracle I'm holding...."  So precious.]  The damage that her right heart sustained while on ECMO when she began to have right-sided heart failure has completely healed and reversed itself.  They said that her heart looked totally normal and healthy and that they could not even see any indicators of pulmonary hypertension any more.  Soooooooooo.... we get to stop taking sildenafil!  And we don't follow up with cardiology again for another six months.  This was better news than we could even have allowed ourselves to imagine!  Clara is especially relieved that her dad doesn't have to force that stuff down her throat any more. (Her daddy is pretty relieved, too).  Goodbye and good riddance, pulmonary hypertension!

After that appointment, we went back to the 6th floor and paid a quick visit to some of our friends in the NICU and PICU.  It was absolutely surreal to get off those elevators and walk those corridors like we did so many times for eleven weeks, but to be pushing Clara in her stroller and be on the outside with her.  It was really indescribable.  It was good for our hearts and souls to see a few of the people who we came to love so dearly during our time at Brenner.  While we don't miss anything about being in the hospital, we do miss the people.  They were like family to us and loved us so well.  It was good to see some of them again.

We had about an hour and half before our appointment with Dr. Turner, and not really enough time to go home, so we went and got some lunch.  Mom and I decided to go to Cagney's, the diner around the corner where we used to eat lunch a couple of times a week while Clara was in the hospital.  It was another surreal moment to be sitting in that restaurant, drinking the same sweet tea and eating the same fried okra with Clara in the booth beside us, snoozing away.   We had so many conversations in those same seats about medications and numbers and doctors and prognoses and diagnoses.  And there we were, with Clara, just soaking her up and praising God for bringing us to this point.  There were many days we sat in a booth there and would never have thought today would have come.  It did.  Boy, did it feel good.

We headed back to The Baptist to see Dr. Turner this afternoon.  He was also very pleased with how she's doing.  He said from listening to her breathe and by looking at her last chest x-ray (which was in May) that he could not tell that she had ever had a diaphragmatic hernia.  He said her left lung is now full size (or close to it) and that she's doing just great.  He gave us warning signs of some of the complications that may crop up in the future and things to be on the lookout for, but sent us on our way with another follow up in three months.  Goodbye and good riddance, hypoplastic left lung!

The scales all differ, so it's hard to say exactly how much weight Clara has gained since pulling the NG tube last Wednesday, but our guess is at least a couple of ounces, maybe as much as four or five.  We pray for continued weight gain, lots of good eating, and some deep and restorative rest in between.  Clara has been spitting up/throwing up a decent bit the last week or so, as many babies do, so we pray that this is not enough to cause her to stop gaining weight and doesn't require further treatment.

It's hard to believe that she is on no medication now besides the Vitamin D that all breastfeeding babies take.  She has no oxygen.  She has no feeding tube.  She is in great health and continues to amaze and surprise the entire medical community.  Tomorrow she has physical therapy and we'll visit the pediatrician again on Thursday for an official weight check.  Then, on Friday, we're heading to Beech Mountain for our first overnight to celebrate the Fourth of July with family.

In addition to the near out-of-body experiences of walking down the 6th floor hallway and eating lunch at Cagneys today, I had a third rush of emotion tonight as I nursed Clara before putting her to bed.  I held her in the glider, in her room, clean and warm from her bath and smelling faintly of the baby lotion we'd coated her down with, just breathing in her very essence.  We rocked, she ate and snoozed, and I prayed through tears a prayer of tremendous thanksgiving and gratitude.  I will never understand exactly why Clara was born with this diaphragmatic hernia.  Even less though, do I understand God's grace and mercy for us and the enormity of the miracles He has performed and continues to perform.  I just can't believe how blessed we are and what an incredible treasure this sweet baby is.   There aren't enough words to express how full my heart is and how thankful I am to our Lord for his never-ending mercies.  Suffice it to say, that today's reports have left us tickled pink. 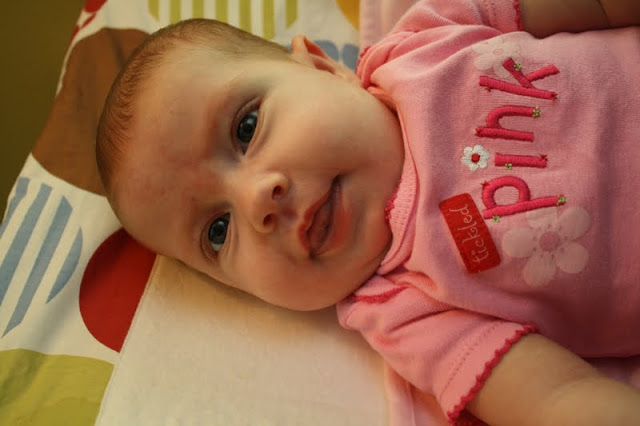 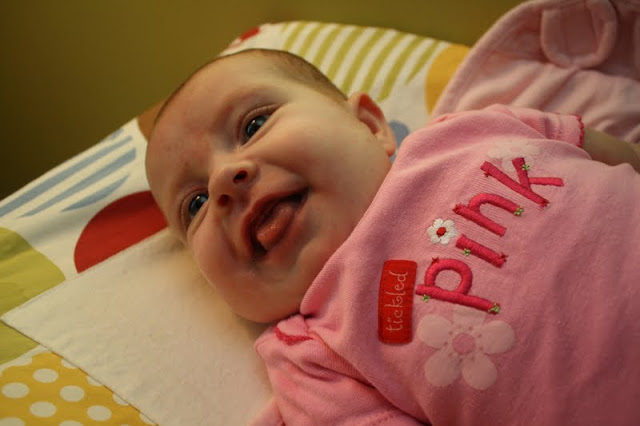 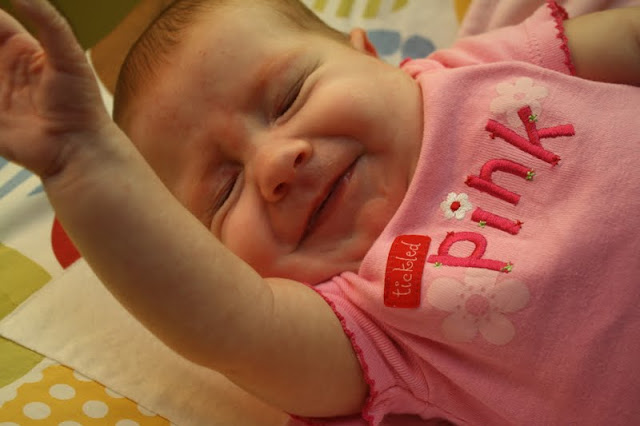