This will be a brief post because today was fairly calm and the pace of things has slowed a bit (also, House is new tonight and since there's not enough medical drama in my day to day life, I need to watch some more of it... I'm getting pretty good at medicine - maybe I'll figure out tonight's diagnosis before House's team does!).

Dr. Turner said today that we are wanting to move slowly and be conservative about things now because "our parachute is gone."  While ECMO was scary in many ways, it was also a big safety net since it was keeping so many of Clara's systems regulated.  Now that it is gone, we have to move slowly and cautiously so as to not upset the apple cart or throw off the tricky balance of things that we're trying to maintain.

Clara had a good day.  This morning her sedation was much lower and she was very awake and alert and it seemed like she was really trying to focus her eyes on things and be aware of her surroundings in a way we had not seen before.  However, her being more awake and alert also meant that she was more sensitive to external stimulation and that she was behaving like a typical baby in many ways.  She is so swollen that it must hurt for her to be touched and several times today she had big temper tantrums (when she was trying to poop, or being moved or having her diaper changed, etc.).  She would cry and scream and fuss and look like any baby throwing a fit, except for the fact that she was silent, of course.  Every time that happened her blood pressure went way up and her O2 saturations dropped.  That's probably what would happen in any baby who was screaming, but since we're monitoring all of that very carefully it's hard to watch those numbers start trending in the wrong directions.  She usually recovered from them fairly quickly and everything returned to where it should be.  Regardless, we ended up increasing her sedation some more this afternoon so that her fits might be less frequent and intense.  My blood pressure was grateful for that too.  Not only was it tough for me emotionally to watch my baby be unhappy (and not be able to hold her or fix it), but it was wearing me out physically since each time I worried that she might not come out of it.  Good thing we didn't have me hooked up to monitors!

The good news about today is that her blood pressures stayed at a better level overall (except for those spikes I mentioned above) and she was diuresing successfully!  The 25% albumin seems to be working in terms of pulling fluid out of her tissues and into her vasculature.  We gave her a couple of doses of lasix today and she responded very well to them.  She was negative almost 200 by the end of the day today.  I think that comes out to almost half a pound in weight, so that's very good!  From yesterday to today she had gained another 0.1 kilogram, so we're glad to see things start to move in the right direction and for her tolerate that well.

We were supposed to be moving to the NICU today, but they were crowded over there and the PICU was fairly empty, so we got to stay one more night.  We will be moving tomorrow.  I know that we are going to get excellent care over there and that it is a good sign for Clara that she's stable enough to be moved.  Still, it's going to be hard on us in a lot of ways.  We will really miss the great folks in the PICU who have taken such good care of us the last three weeks and who we have gotten to know and love.  There will be a fairly significant transfer of care (new attending physicians, residents, nurses and respiratory therapists) so we will have to get to know and learn the personalities of new people and probably a little different philosophy of care overall.  I'm also a little anxious about something "falling between the cracks" or getting lost in communication as she is transferred back.  It will definitely be an adjustment for us.  Also, in the PICU we had a large private room and usually a nurse all to ourselves.  In the NICU, she'll be in a pod with 5-7 other babies and will share a nurse with at least 2 other babies and their families.  Things are just more crowded and less private over there, so that will be an adjustment for us, even though Clara won't know the difference.

I think that overall the pace of her recovery will slow down some from this point.  She is still very sick, still in critical condition, still in ICU.  But being off of ECMO means that we are not facing the same ticking time bomb that we were.  I think that each tweak and adjustment will be taken very slowly since our safety net is gone.  We are expecting to be in the hospital for a minimum of another month and it could be much longer.  The steps from here will be to continue diuresis, begin weaning vent settings so she can move towards extubation, weaning her long list of medications and switching some of them to oral meds, and beginning to learn how to feed.  All of these things will take time and patience and we will not want to rush them.  This is the marathon we were told about...

We thank you for your continued love and prayers for us, especially for:
- Thanking God for her successful diuresis today.   May it continue steadily!
- A safe and smooth transfer to the NICU tomorrow and an easy adjustment for us as we start over with new teams.
- Clara's ability to begin weaning vent settings and drugs
- Continued improvement with lowering pulmonary pressures
- Continued protection from other setbacks, infections, or complications
- Improved toleration of touch and stimulation so that we might be able to hold her in days to come...
- And always, much love, adoration and thanksgiving for the miracles God is continuing to perform in her life and in the lives of many others who are being changed by her story.

I mentioned the other day that patience is not my strength.  We are going to need patience in the days and weeks ahead as we celebrate small baby steps in the right direction like we had today, but don't see huge drastic improvements in her hour by hour.  I'm very aware that we're soaring without a parachute now, and asking God to protect us from falling or crashing.  I'm thankful that He's the one in control of this situation.  That's the only parachute we need. 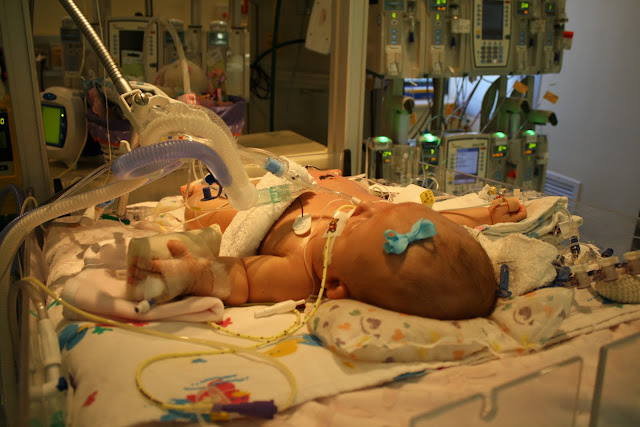 We've been trying to feature some of our most wonderful staff over the past few days and here are two more nurses who have been great to us.  Jen on the left and Crystal on the right.  Crystal has carried Clara through most of her weekends and Mondays in the PICU and we are so grateful for her expertise and loving care.  We will miss you, girls!