Updates and a Baby Date

It's been a big week of appointments and we continue to be encouraged and hopeful about Clara's arrival!  On Tuesday we had another ultrasound and got some more looks at Sweet Clara's face.  The sonographer (Kathy, who we love love love) has now pronounced that she not only has Robert's head size, but that she looks like him in the face too.  She certainly has chubby cheeks and sweet tiny ears.  We didn't get as good of a look this time as last because her arm was in front of her face for much of the time, but I kind of think she might have my chin.  She does have hair (bets are yours on straight vs. curly) and we saw her opening her mouth, sucking on her arm and fingers and displaying a pitiful pout that melted Robert's heart and made me threaten time out already.  We also saw her chest rising and falling (good breathing practice motion) and hiccups (more breathing evidence, plus a strong diaphragm).  The doctor said that he could even identify some viable right lung tissue and since lung is very difficult to see on an ultrasound the fact that he could see any at all is a sign there must be a significant amount.  All great news!  The only thing that was even sort of a concern is that the amniotic fluid measurements were on the high side of the normal range.  But he was not super concerned about it and after meeting with our regular OB today, it sounds like it's probably okay.  They measured 23cm and our doctor said she's not usually worried until it's 30cm or higher.  Too much amniotic fluid could be a sign that the baby isn't swallowing effectively, but again - they don't think we're in that range yet.  They'll do another measurement the next time  we go back and keep an eye on it.  And we'll keep praying that Clara's swallowing reflexes continue to develop and that she'll be able to feed well.  Her current weight (at 30 weeks, 1 day) is THREE POUNDS, NINE OUNCES!  I was pulling for at least three pounds, so nine ounces over that was delightful!  She's about 60th percentile, so she's growing really well.  If she keeps gaining at this rate and pace we're looking at probably about an 8 pound baby.  The bigger the baby, the better the surgery, so we'll take it!  And she's still head down and likely to stay that way at this point, so we're preparing for a scheduled induction instead of a C-section.  That was the report from yesterday's perinatologists.  Overall - stable and good!  Next ultrasound: three weeks.

Last night we went to our second birthing class at the hospital.  The two nurses that teach it are both very experienced in Labor and Delivery, Cesarean, and Newborn Nursery.  When we told them what we were facing they were both very positive and encouraging as well.  We love to hear medical professionals (any medical professionals) tell us that things will be okay.  One of them was very surprised that we already had a diagnosis.  She said that most of her experience with diaphragmatic hernias were babies that were not diagnosed until after birth.  That made us thankful once again for the time we've had to prepare and the excellent pre-natal care that we have received the past few months.  When we told her that the liver and spleen were still below the diaphragm she also said, "Sounds like you've got the best case scenario!"  Now granted, she hasn't looked at our records and she's not a pediatric surgeon, but still - a positive attitude like that from anyone in the medical field is very encouraging and hopeful to us.  Last night was also "Meet the Doctors" for folks trying to choose a pediatrician.  We've already chosen a pediatrician and met with him and like him very very much, but the Q & A last night was still helpful.  When we explained to the panel of doctors about our case and asked about the likelihood of being able to transition to breast feeding at some point, they were also very encouraging.  None of them had terror or horror on their faces when we said "diaphragmatic hernia" and they all nodded encouragingly about her eventual recovery and return to "normal."  So, again, while there's no way to predict the future or for them to know details of how Clara will do, we're overall encouraged by some general positive medical vibes.

Today I had an appointment with my regular OB.  I got to see Dr. Scherer who has cared so exceptionally well for us from the beginning.  I taught her daughter in kindergarten last year and got to know her very well, and am so deeply grateful for God's hand in placing their whole family in my life in His perfect timing.  She has continually gone above and beyond to take care of us and I feel so special to be receiving this high level of personal care.  She was also positive and encouraging about the pregnancy in general.  Although I'm still sick some, the Zofran is mostly managing that and aside from nausea, vomiting, heartburn, and other typical third trimester aches and pains, this has been a very healthy pregnancy.  My glucose test came back with good blood sugar levels, I haven't gained too much (or too little) weight, there are no signs of preclampsia or other risk factors and like I already mentioned, Clara is growing very well!  It was a good visit with Dr. Scherer today and even though I start going every 2 weeks now, I won't get to see her again until March.  So, we went ahead and picked a tentative date for this baby to be born!

The official due date is March 28.  As I've mentioned before, we're wanting to balance letting Clara grow and get as big as possible with not wanting my water to break or for me to go into "unplanned" labor.  So we're tentatively planning a scheduled induction for WEDNESDAY, MARCH 23.  Mark your calendars. :)  Hopefully she'll be here sometime that day or the next.  Dr. Scherer still has to check with the pediatric surgeons and make sure that date works well for them and that everything at Baptist will be ready.  Assuming they are, we'll let the neonatalogists and pediatric cardiologists and everyone else that needs to be involved know to be on standby and we'll have everyone ready to give this baby the best possible care once she's on "the outside."  It's a little weird to have a more specific date than just a due date and know when we'll really be doing this thing.  But my type A control freak personality is delighted to have something penciled in on the calendar.  Obviously, we'll be monitoring things between now and then and it could be subject to change...

Okay!  Enough medical updates.  Let's cut to the chase and see some more photos of Clara!  Like I said, these aren't quite as good as last time, but in three weeks we'll get another look.  Kathy was frustrated with Clara's lack of cooperation but we still think she's the best. 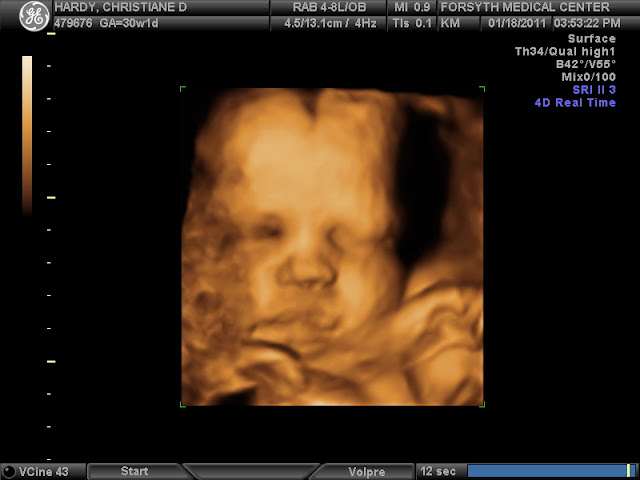 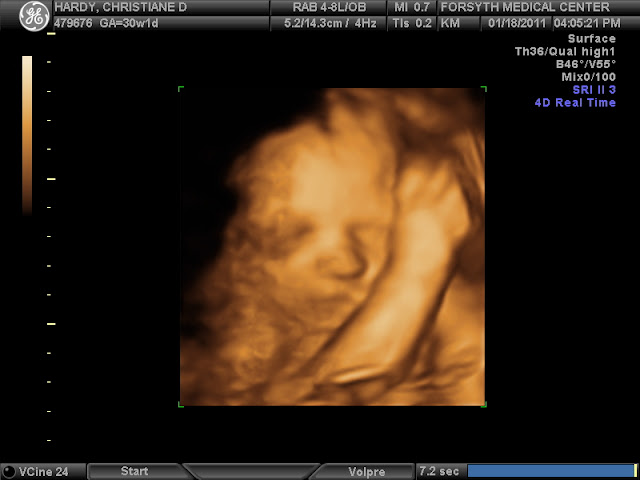 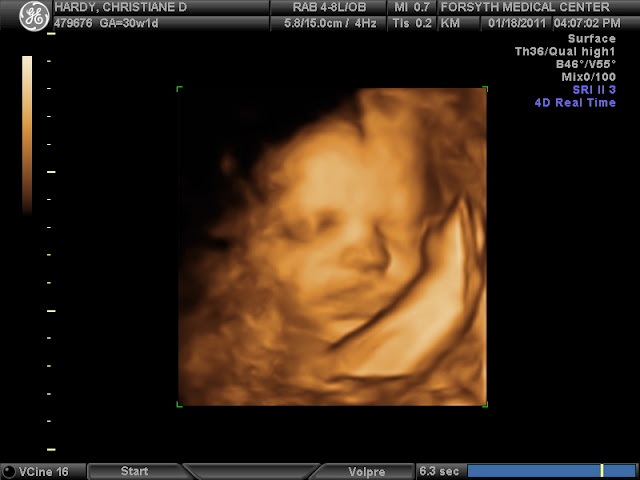 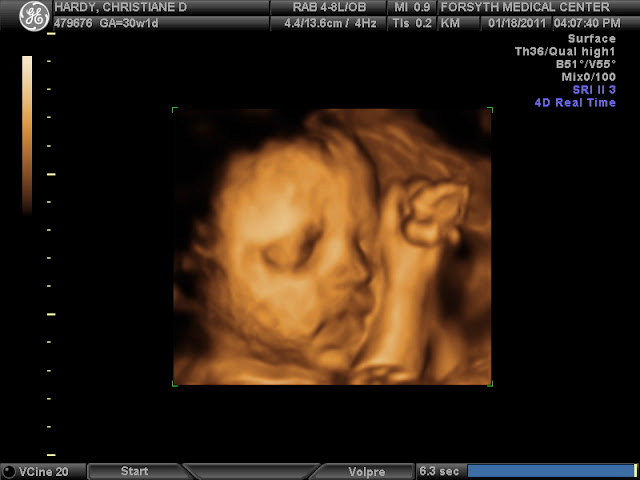 We know that she can already hear and recognize our voices with that little ear.  I wonder if she can hear all the prayers being said on her behalf...  Keep 'em coming.
Posted by Chrissy at 7:54 PM