Oy.  This poor sad blog.  I did have high hopes of getting caught up this summer and maybe that will still happen.  But in the meantime, we gotta fast forward to right now.  Clara needs your prayers again, folks.

Over the past couple of years, Clara has had several somewhat mysterious vomiting episodes.  Each time, she vomits frequently and violently, and as a result quickly dehydrates and then begins vomiting bile.  Bilious vomiting is never a good things and usually earns us a one-way trip to the Emergency Room for x-rays, fluids, and tons of anti-nausea meds.  Each of these episodes in the past have gone away again (relatively quickly) and we've returned home, unsure of the cause, but grateful to have Clara healthy again.  And we've moved on....

Last Sunday (May 24) after a fun weekend of celebrating Eloise's first birthday (again, I will eventually catch up on this blog and share super cute photos of her super fun circus party), Clara began complaining of stomach pain.  A few hours later she began vomiting.  We took a trip to Urgent Care, had an x-ray, which did not show any bowel obstruction or reherniation (the two big bad scary things), and headed home.  Several hours later, the vomiting was getting worse and so we headed to the ER.  We stayed all night while she got IV fluids, more x-rays, many doses of zofran and an enema since her x-rays showed pretty severe constipation.  Again, we got her hydrated and the stopped the vomiting long enough that we were sent home.  After being home a few hours, she vomited some more, but within 24 hours of the episode beginning she was done throwing up and we were left with "just" stomach pain.  We assumed the pain was from constipation and began a pretty big clean out with quite a bit of miralax.  Two days sitting on a training potty in front of every Disney movie we own and her bowels were mostly empty and she was finally feeling better.

On Thursday of that week Clara was feeling much better, but we went for another x-ray just to make sure that the constipation had been sufficiently dealt with.  Her bowels looked much better, but that x-ray showed what looked like a reoccurance of her diaphragmatic hernia (or reherniation).  Her GI and surgeon both felt like it warranted another look so on Monday we went back to Brenner Children's Hospital for an ultrasound.  We wanted to also take a look at her liver because several of her x-rays have come back with notes about a "possible mass."   Turns out her liver is just fine, only a little misshapen and lopsided from her organs forming in a strange position and being shoved back down into the not-quite-right-locations.  But the ultrasound did appear to confirm a hernia.

We've talked lots with Clara's surgeon, Dr. Petty, who I love and trust and adore, and he feels strongly that we need to proceed with surgery.  He will begin with laparoscopy to fully confirm that she has reherniated and get the lay of the land, but then will have to open her initial incision to do the repair (the gore-tex patch is really sticky and although we'd love for him to be as minimally invasive as possible, we're more concerned with getting this repair done thoroughly).

This surgery is not as serious as her initial repair.  There's just a loop of colon that has slipped through the hole instead of all of her abdominal organs, and she has working lungs now.  She's also four years old and not a week old so she's a lot bigger to operate on.  Oh, and she's not on ECMO.  But it's still major surgery and will probably earn us about a week's stay in the hospital and some more time to recover at home.  It will be harder for me to juggle tending to Clara and also continuing to care for her still-nursing little sister.  It will, in many ways, be harder to watch Clara go through the pain and fear of surgery at age four than it was when she was just a week old.  I loved her then, but as my love for her only grows and I know her so much more intimately now, it is hard to imagine what it will be like to watch them wheel her away and know that they are cutting her open.

Alas, it must be done.  Surgery will most likely be scheduled for this Thursday.  I'll keep you posted as I can here, but I've also started a The Hardy Life Facebook page which you can follow at https://www.facebook.com/TheHardyLife.  Let's be honest, my recent track record with blogging is pretty pitiful.

We are grateful for all the ways that you have reached out and cared for us in the past week and thank you for the ways that you will continue to, we know.  Please begin praying now, for a simple and complete surgical repair and a quick and complication-free recovery.  Pray for us to juggle all the pieces of this and help Clara to know that she is deeply loved.  Pray for the doctors and nurses who will be caring for her.  Pray that this surgery will resolve her vomiting (we're actually not totally sure that they're linked, but it would be great if this were the explanation for these episodes).  Pray that Clara remains healthy and happy in the next few days leading up to the surgery.  Pray for strength and stamina and energy for all of us.  This is not the same marathon that we faced after her birth, but it is significant and it is daunting in its own way.

We've got a couple of days to prepare.... God knows how much I need to be able to plan.  We are so very thankful that Clara is, for the moment, asymptomatic.

Thanks be to God.

(For those who know what you're looking at, tilt your screen just right and you can see a loop of colon above the diaphragm here:) 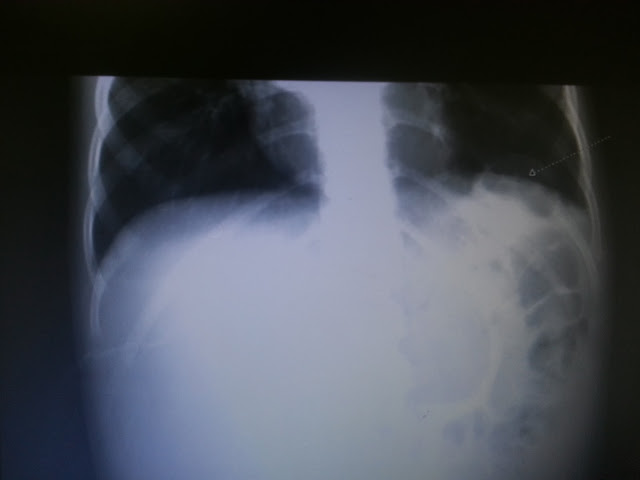