I took the photos on time and am only two almost three weeks late finally writing about it and getting them up.  Time is flying and I am trying desperately to soak up every minute, aware that as quickly as it passes, it will never return.  I'm not sure I've ever been so intentional about living in the present in my whole life.  Every day with Clara is truly pure joy and every night I go to bed satisfied and happy and looking forward to the next day with her.  I'm not sure there's ever been another time in my life when I have felt so content with my daily work.

So, let's see what has happened in the past three months since I did one of these updates.  Clara is not just walking anymore, she's running and climbing.... everywhere.  She reminds me a bit more of a boy than a girl in this way.  She's active, she's busy, she's curious.  She's an explorer and a problem solver.  She has no fear (as shown in those beach videos where she went crashing into the waves!).  She is brave.  Which we knew.  But it's fun to watch her show that bravery in new and less life-and-death ways than a year ago this time.  It's not just gross motor that has changed; she's doing lots with her little hands these days too.  She loves taking lids off and putting them back on, turning knobs, building simple towers, and is beginning to attempt puzzles.  She's shown interest in some self-feeding with a spoon too, except for the whole actually eating it part.

Her communication has changed a lot this past quarter!  She still does some baby sign language, and has added a few to her repertoire (please, all done, more, milk, eat), but they are already starting to fade in favor of words.  She babbles constantly, although I couldn't tell you most of what she's saying.  We love to hear her little voice going a mile a minute: "abbeeabbeeabbeeaaaaaddeeeeaaaaadeeeaaddeeeeeeee"  She is learning new words every day and can already say: dada, mama, doggy, ball, hairbow, hi, bubbles, keys, clock, flag, brown bear, night night, bye bye, go, Big Daddy, shoe, up, down, EIEIO, uh oh, amen, all done,  .... and lots of animal sounds.  One of our favorite things is when we say, "What does Clara say?"  and she says "I love you" which  sounds more like "I luuuuuuuu."  Of course, her receptive vocabulary is even stronger.  She has several other "tricks" too, like "What does a doctor say?" to which she shakes her head and finger as if to say, "no more monkeys jumping on the bed!" or "Smell the flowers" where she wrinkles her nose and breathes in.  She is able to follow lots of simple commands now like "go get the _____," "sit down," "kick your legs!" or "Come here!"  She can point to several body parts.  I'll try to capture some of that on video soon.


She's starting to pretend a little bit.  She spends lots of time in her play kitchen stirring things and playing with plastic food.  She will give a baby doll or stuffed animal a bottle or bite of food.  She loves loves talking on the phone (or remote control, or whatever else she can find that might pass for a phone) and brushing her hair.  She likes to mimic people.  She loves fingerplays like "itsy bitsy spider," "this little piggy" and "five little monkeys jumping on the bed."  She loves to listen to us sing and she still of course loves books (when she's in the mood to sit long enough to finish one)!  She likes to play with a ball, watch us blow bubbles, and ride on her toy car.  She is starting to sort shapes and loves stacking and unstacking rings and pressing buttons.  She will dance to music.  She loves to be outside.  She loves the water.


She is social. Clara loves people. All people.  Her people.  Strangers.  Children.  Oh, especially children just a little older than her.  I'd say her two favorite demographics are men over 60 and boys between ages 5-8.  She knows how to flirt, too.  Puts her hands behind her back and leans forward slightly while sticking out her chin and grinning as big as she can, as if to say, "Aren't I cute?!"  She waves at people and blows kisses.  No real signs of separation anxiety around here.  Restaurants are among her favorite places to visit... she just loves to walk from table to table and see whose love and affection she can earn.  The answer?  Almost everyone's.

I know I'm biased.  Wildly biased, in fact.  But there's something about Clara, y'all.  She captures people's hearts in a way that leaves me wondering and shaking my head every time.  Constantly, total strangers who know nothing about her history or her story will come up to us and start talking to her and delighting in her.  Now I know that everybody loves all babies.  But I promise you, this is different.  She has this twinkle, this sparkle, and it captivates people.  Sometimes we'll start talking to them and tell a bit of her story and will realize that these people needed one of those sparkles from Clara for some reason in particular.  People who have lost a child or grandchild or are in the midst of a personal battle of their own.  She continues to inspire and to spread joy.  A couple months ago we were eating lunch at QDoba and an elderly lady kept smiling and waving at Clara.  When she left the restaurant she came up to us with tears in her eyes and said, "You don't know how much she touched me today.  Thank you.  Thank you for sharing her with me."  I don't know why she needed Clara.  I don't know her story.  But I know that Clara has a special something about her.  She is sunshine.

In terms of her eating we have made a small bit of progress, I suppose.  Although in other ways it feels like we've stepped back a little too.  She's finished with a bottle and dreamfeeds (please cue the Hallelujah chorus) and I also stopped pumping after 13 months of marital bliss resigned tolerance with my rhythmic little friend in the black bag.  (Those of you who have exclusively pumped, or pumped at all, know my delight over this!)  She's still nursing a couple times a day in addition to drinking 12-18 ounces of regular whole cow's milk from a straw cup.  She's a bit pickier now than she was a few months ago, but still eats a decent variety of table food, just not very much of anything.  She resists a spoon adamantly so most of her food is "pick up" stuff.  She can self-feed, but usually after just a few bites she quits, so I am still "driving" most of her eating, so to speak.  It requires lots of distraction (toys, songs, other people, or.... I'm embarrassed to admit.... Sesame Street) to sneak food in her mouth and hope it stays in there and gets swallowed instead of spit out.  She's so busy and active that time strapped in a high chair is simply not her favorite (and that's probably an understatement).  So, when possible she eats in the stroller, in a grocery cart, at the coffee table, or in a restaurant - which is full of new people and distractions.  I still get frustrated with feeding her and feeling like it's an enormous amount of effort for sometimes very very little results.  We offer as many high calorie foods as possible and do things like cover veggies in tons of butter.  Despite all those efforts, she only gained eleven ounces between her 12 month and 15 month checkups and dropped from the 25th percentile to the 12th.  We're not tremendously worried (although I'd be lying if I didn't say I was a little concerned about it) and are continuing our efforts to help her keep gaining.  I'm trying desperately to avoid a PediaSure regimen which would feel like a big step back to me. We'll check back at 18 months.  I will be glad when eating is not such a big focus of our days or source of worry and concern for me, the primary feeding lady.

I tried weaning her prevacid soon after her first birthday.  After about a month of horrific napping it dawned on me that perhaps reflux was the culprit.  Sure enough, as soon as I resumed it, my good little sleeper was back.  So she still does have some reflux and I'll happily keep giving her that med as long as she needs it.  She naps twice a day for 1-2 hours each time and still sleeps about eleven hours at night. (8PM-7AM).  We've just started putting her down at night while she's still awake and letting her put herself to sleep.  She's done a great job with that and we'll eventually move that direction for naps too.  But for now, I am still enjoying nursing and snuggling.  Maybe when she goes to one nap we'll work on that.  I've yet to hear of any mother complain by saying, "I sure wish I hadn't rocked them as  much when they were little."

Okay!  If you've actually made it this far without skipping to the photos, I'm impressed.  I took these on her 15 month birthday, but my camera battery was dead in the morning when the lighting is better and when we tried again at lunchtime it was hot and the sun was overhead, so they aren't just stunning.  But you just wait for the Fourth of July pictures coming next.  There are some precious ones in that batch.

Happy 15 month birthday, Clara!  You're the light of our lives and the joy of our every day.  I'm so thankful God decided you needed to be here and blessed to have the honor and privilege of spending my days with you.  Your joy is abundant and it makes mine abundant too.  Thanks be to God. 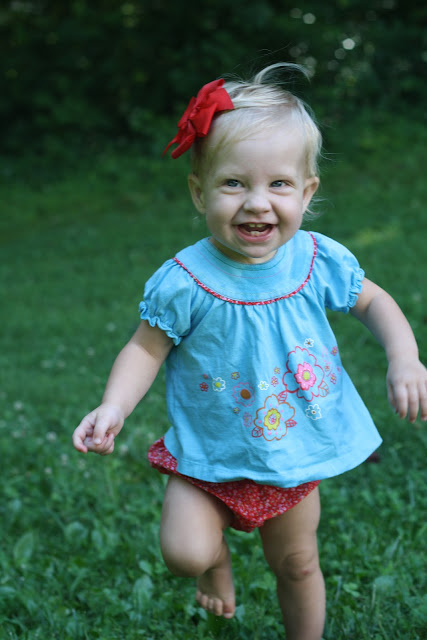 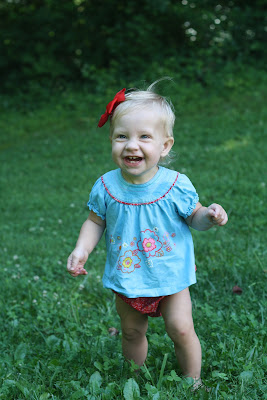 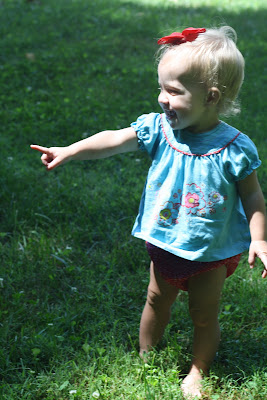 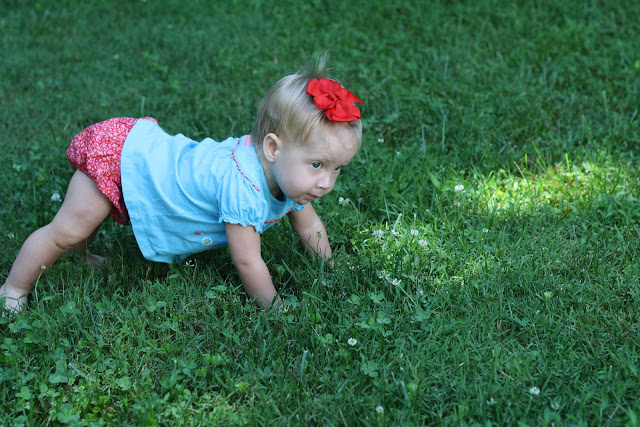 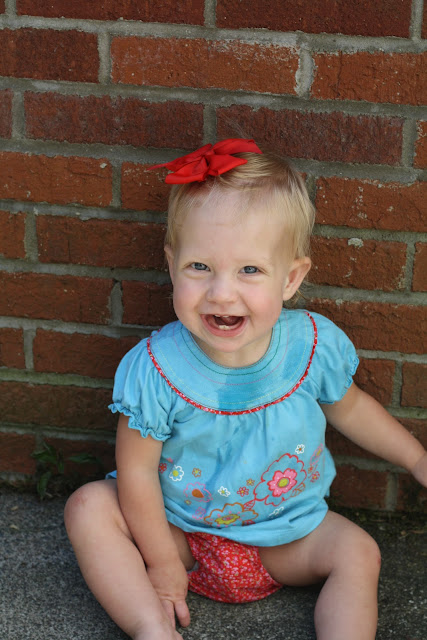 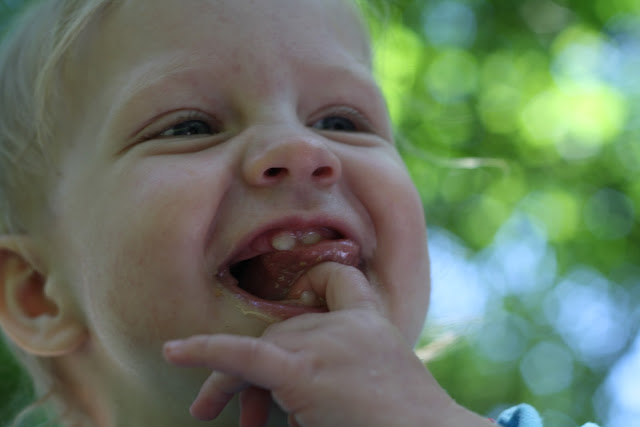 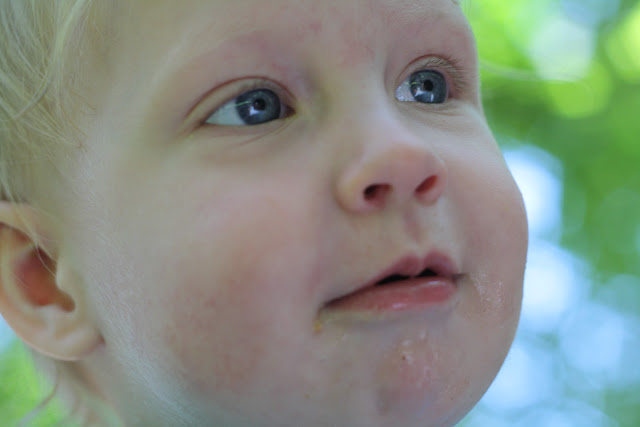 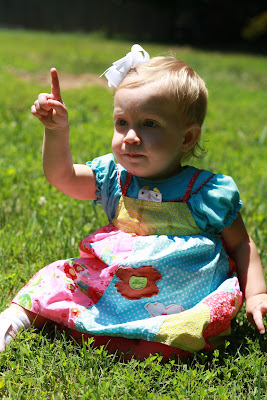 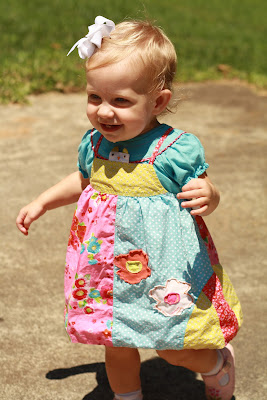 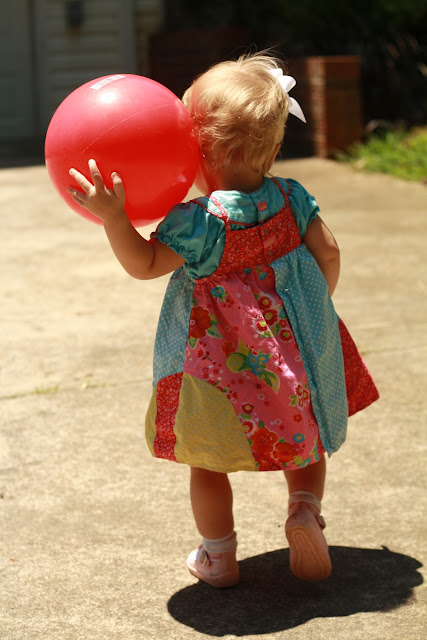 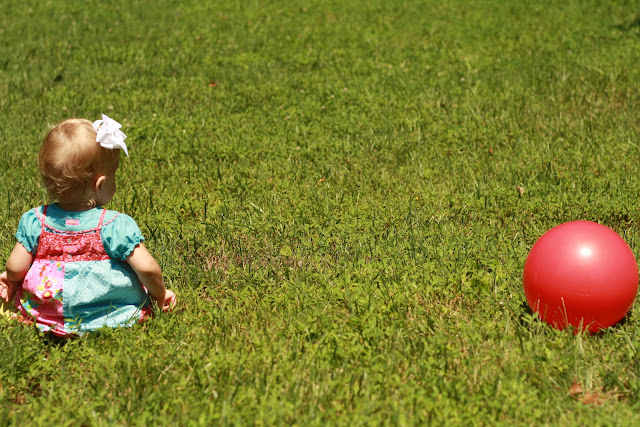