Clara is eight months old!  Actually she turned eight months old on Wednesday, but the first part of this week was a little nuts for me and I didn’t get this post done.  So, here’s the update on Clara’s latest birthday, just a couple days late. 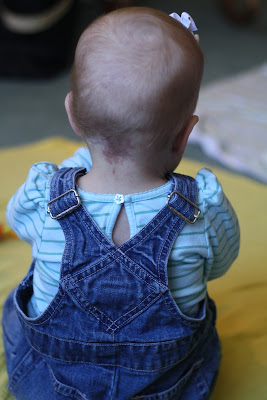 At her last weight, Clara was 16 pounds 12.5 ounces.  She was close to 50th percentile in weight, height and most notable weight for height (where she had been hovering closer to 10th percentile).  Our hard work has paid off.  And boy is it hard work.  Clara definitely has some eating delays, but our latest appointment with Dr. C was both encouraging and affirming.   It was nice to hear a medical professional recognize that she really does still struggle to eat and that although her weight gain is fabulous, it has not been without incredible persistence, determination and patience on the part of those who feed her (which, let’s be honest – is mostly me.)  We will begin “feeding therapy” on Monday with either a speech or occupational therapist and I hope they’ll have some tips for helping her be more successful with solids.  We've already seen some really great progress in the past two weeks since we last saw Dr. C with the strategies she gave us.  She's eating a couple ounces a day of pureed "stuff" and is still gnawing on whole bananas and avocados, too.  Right now, the favorite food seems to be blueberry yogurt.  Her bottle feeding is still a great battle much of the time too, but since she’s supposed to be kicking the bottle habit in just another four months, we’re going to focus on helping her eat solids and drink from a cup instead of improving the bottle situation.  Hopefully if those can be a lot better by the time she turns a year we can give up the bottle and not worry about the fact that she requires a dark room, a rocking chair, a boppy, her mother, soothing music, a paci, sometimes a swaddle and more often than not being totally asleep first in order to drink her bottle.  I’ll be glad to have that chapter behind us! 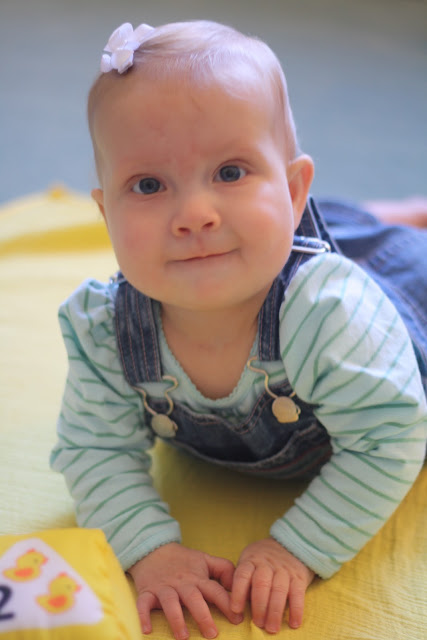 But I’m not wishing away any time.  No siree.  The past eight months have gone too quickly.  This month especially, Clara seems to be acting more and more like a soon-to-be-toddler and less like a little baby.  She is getting strong.  She still loves standing on her feet and bouncing and loves pulling up on our hands or anything else she can grab to make herself vertical.  She willingly spends more time on her tummy now and is working so hard to crawl.  She will scoot a little bit forward, commando style.  I’m sure that by her nine month birthday I’ll be reporting that we’ve got a crawler.  She is busy busy busy, always moving and rolling and scooching and pulling.  Diaper changes are quite a challenge.  Her vocalizations have really changed this month.  She will screech and scream and is exploring the range of her voice, especially when she gets frustrated (like when she’s trying to crawl and can’t quite get it…).

Although it doesn’t seem possible, I think she just gets happier and happier.  Rarely do we hear her cry, unless she has fallen over and bonked her head.  She giggles the most for her daddy, but will flash that big gummy grin for friends and strangers alike.  She is so interested in her world and is constantly checking things out.  She’s gotten really good at getting around, even if she’s not yet officially crawling.  If she sees something she wants, she will maneuver her way to it.  Childproofing is not far off at all.  She loves to play pat-a-cake and hear “Five Little Monkeys” and other rhymes, but her favorite game right now is peek-a-boo.  She is constantly sticking her tongue out and has started shaking her head back and forth as if to say, “No no no no no!”  (Let’s hope she doesn’t actually mean that or else I’ve got a very defiant child!) She is far too busy to snuggle much when awake these days, so I find myself holding her extra long before each nap and soaking in her sleepy baby-ness before it all fades away completely.  She is mostly sleeping through the night now, with a few nights here and there that she still wakes a few extra times.  She goes to bed around 8PM, Robert gives her a bottle in her sleep at about 11PM and she sleeps until I nurse her in the early morning around 5-6AM before going back to sleep until about 7 or 7:30.

No teeth yet!  We’ve had moments when I was convinced a tooth was going to pop through any minute now.  She drools buckets and everything in sight goes straight to her mouth.  But no teeth yet. No hurry here. 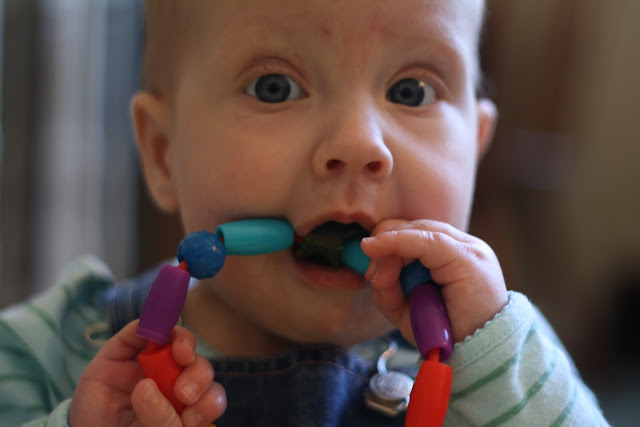 Her personality has really started to show this month too.  It’s no surprise (she got a double dose of genes), but this girl is stubborn.  She has made it clear what she does (clapping and saying, “Yaaaaay Clara!!”) and does not (spoon-feeding) like. She’s fiercely independent too…. Most of the time she will not let us put a paci in her mouth for her, but if you hand it to her, she will willingly put it in her mouth herself.  I can see already how tedious the “Me do it” stage is going to be!  She works hard and is motivated.  I know that seems like a strange thing to say about an eight month old, but it seems very obvious to me how determined she is to figure new things out and her persistence in getting it is something I’m already very proud of.  Most of all, she’s incredibly happy, alert, and easy-going.  If it weren’t for her feeding issues, we’d really have about the easiest baby around.  I won’t complain. 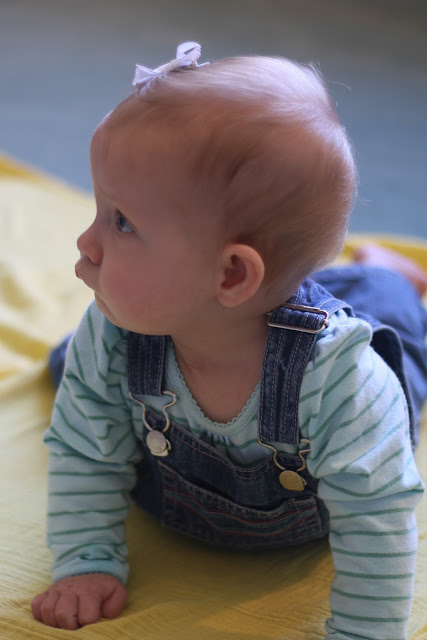 Happy eight month birthday, Clara!  We love you and are so proud of the smart and strong little girl you are becoming (not to mention stinkin’ cute). 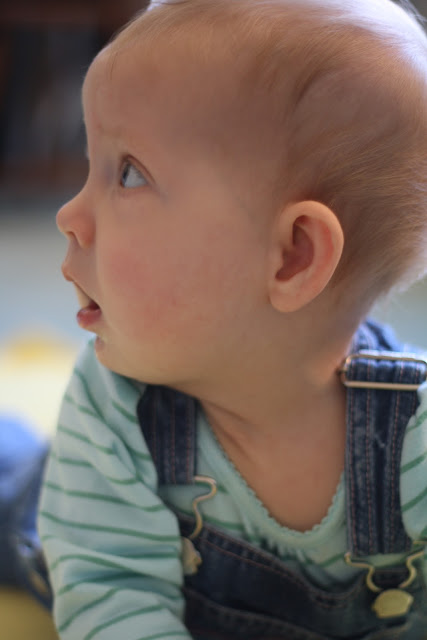