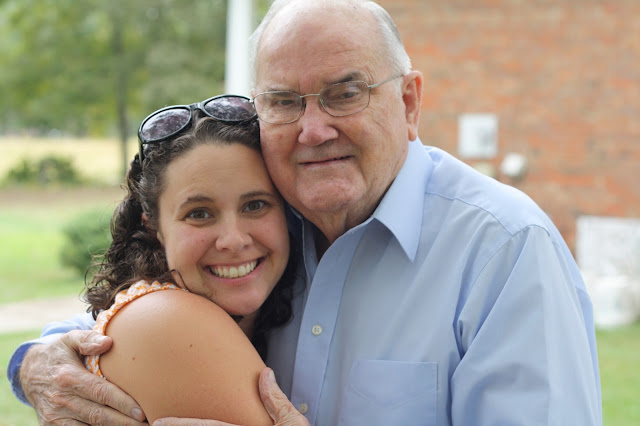 I lost all four of my grandparents when I was relatively young.  As an adult, I have grieved their absence and wished that I had grown to know and love them a bit longer.  Part of my desire (and joy!) for Clara to know her grandparents comes from a real sense of loss about this for me.  When I met Robert, I was shocked to learn that he not only had all four of his grandparents still living, but that they all lived in the same town with him and had been a part of his life nearly daily.  What seemed so normal to him, seemed like a rare treasure to me.  I'm thankful to have gotten to know all four of his grandparents, something I cannot even say about my own.  And I'm so so grateful that Clara got to meet two of them.  I got a second chance at grandparents, thanks to them; they truly embraced and loved me as their own.  I love them all and all for different reasons, but the truth of it is - Papaw has always kind of been my favorite.  Something about his dryness, his sense of humor, his feisty spirit, his candid opinions laced with a kind and loving twinkle..... I just loved this man.  Plus, if he hadn't hassled and haggled Robert to hurry up and propose, who knows if he ever would have.  We will miss him more than I can say, but I will treasure the memories and the lessons learned from him.  Even if Clara doesn't remember him, we'll have photos and videos to show her, which is a blessing.  He loved her more than just about anything on this earth.  He was sad to not be able to stick around longer and watch her grow up.  But we know his spirit is here with us, and I have a feeling that Clara's got a little Bratton in her.  For that, I am thankful. 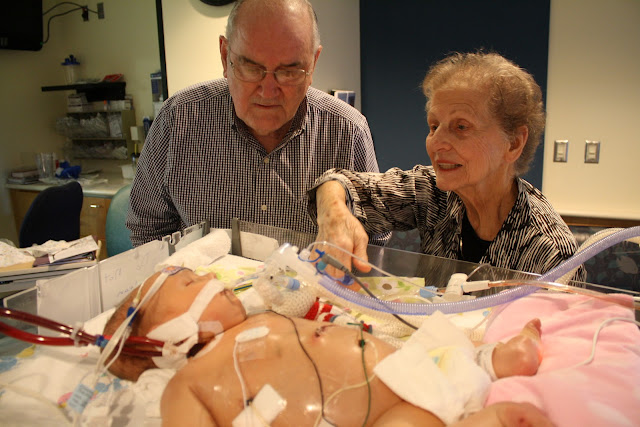 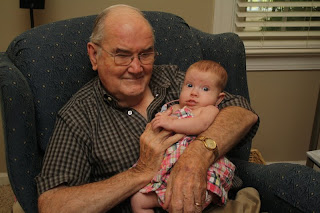 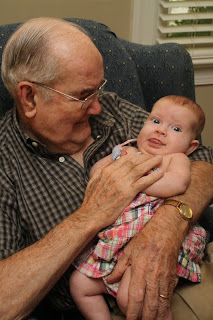 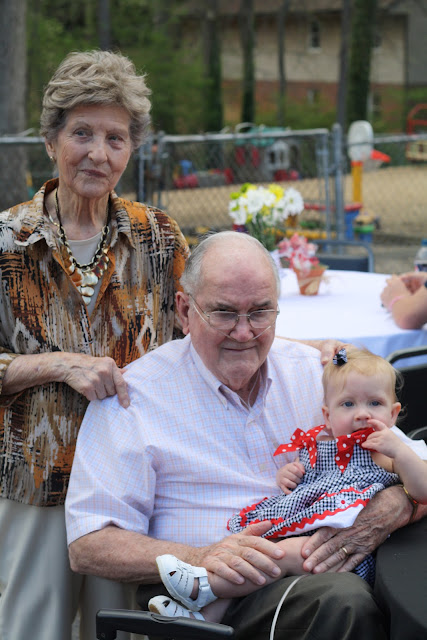 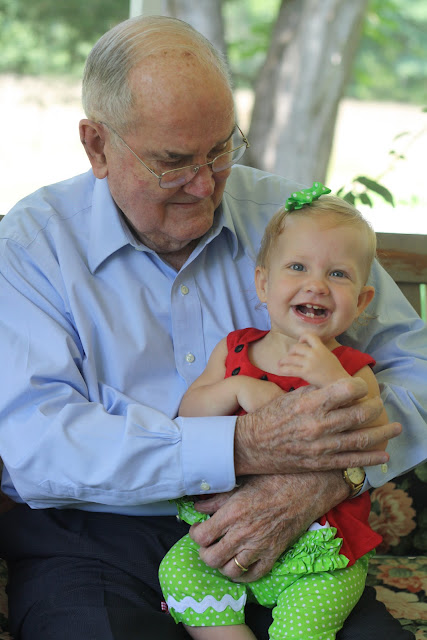 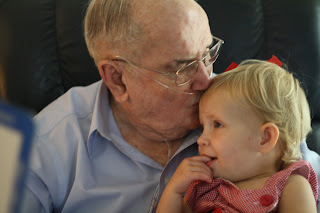 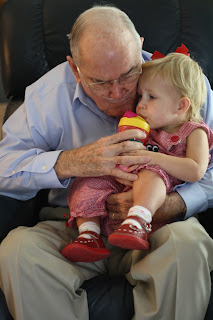 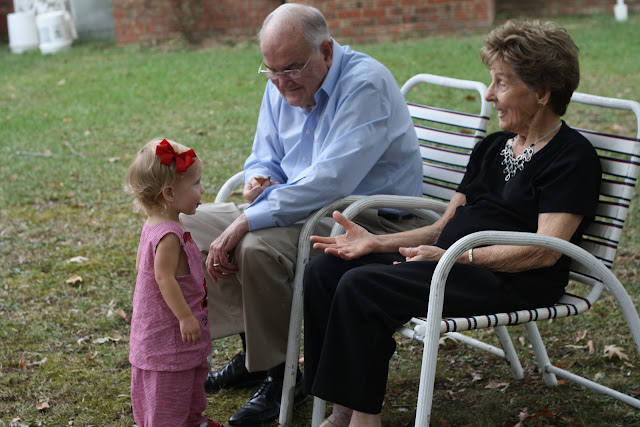 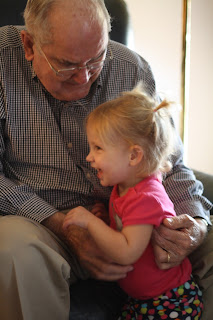 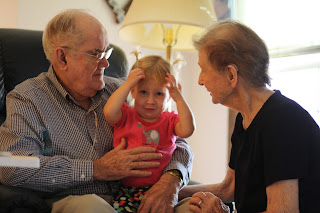 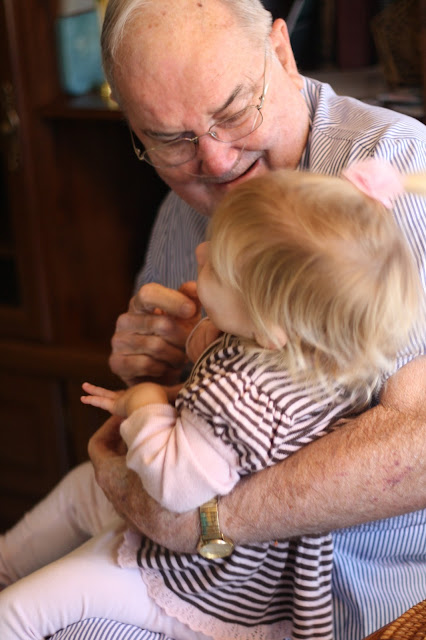 Robert had the opportunity to eulogize Papaw at his memorial service and he did a beautiful job.  Here's what he spoke on that day:

Charles Bratton, “Papaw,” was a blessing to me throughout my life.  So much so that I had a hard time coming up with just how I would be able to express it today.  So I think it will be useful to frame my words around some of the things that I learned from Papaw.  And I learned A LOT from the man, so this is certainly not a complete list, but I hope that the few things I’ve identified and the few minutes I have to talk about them will come somewhere close to painting a picture of a man to whom I owe so much.

Papaw taught me the importance of being capable.
Papaw was a VAST resource of ability and know-how.  He wasn’t one to depend on someone else unless he had to, so he made it a point to seek out the knowledge and resources to do things for himself. He taught himself how to do woodworking, and our families’ homes are full of chests, dressers, desks, and tables that Papaw built himself.  He gave me my rifle and shotgun, and taught me how to use them safely, how to care for them, and how to use them to hit things smaller than the side of a barn.  He had a mechanical mind, and could build, maintain, and repair any number of the things he used.  An often-repeated mantra in our family was coined by Elizabeth as a small child: “Papaw fix it!” And sure enough, he would.  I can’t tell you how proud I have been the couple of times that Clara has said “Daddy fix it!”

Papaw taught me about hard work.
Papaw took that all of his capabilities and by God, he put them to use.  Whether he was building furniture, mowing the grass, mending a barbed-wire fence, whatever the task, Papaw would set about it with a mind to get it done, and I always got the impression that he derived as much satisfaction from the process as from the result.  I will always remember watching Papaw grunt and heave while giving a project his all, with an ever-present bead of sweat hanging on to the end of his nose.

Papaw taught me to always appreciate God’s Creation.
Most of my memories of Papaw that have and will stick with me are outside.  He loved working outside in his garden and doing all the other tasks that needed to be done on the farm, but even if there wasn’t a job to be done, he’d find a way to get outdoors.  He loved hunting, and I learned from an early age how delicious venison is, but even when he came home empty-handed, he seemed just as satisfied, having spent a few hours in the woods.  And he was fascinated by foreign landscapes as well; he always kept up his subscriptions to National Geographic and Arizona Highways, and each issue would get thumbed through multiple times.  We went on numerous vacations out west, and Papaw was with me when I saw the Giant Redwoods, Monument Valley, and Yosemite National Park.  I’ll always have the memory of intimate moment he and I shared when I was six, and I had to “go,” and Papaw took me off the beaten path and found me the perfect makeshift toilet I can imagine: a stand of junipers looking out from the rim of the Grand Canyon.  He even sacrificed his good cloth handkerchief for my benefit.

Years later, Papaw joined me and my dad and some friends on a trip through Utah.  I watched his face as we drove through the high desert and along canyon ridges; let me tell you that child-like wonder isn’t just reserved for children.

Papaw taught me to have a sense of humor.
Papaw was funny.  His wits were ALWAYS razor-sharp, and time with him was always filled with laughter.   He had a million little sayings that he always used, like if he had too much to do, he’d say he was “busier than a one-eyed man at a burlesque show.”  The last few months when he couldn’t get around as much as he wanted, he said he was “as useless as tits on a bull.”

A lot of the time, his humor was directed AT you; anyone who spent a lot of time around him got their fair share of ribbing.  But even when his jokes had a little bit of an edge, one glance at his eyes told you that there was nothing but love behind them.

Papaw taught me that love is MUCH more about actions than words.
Any of you who knew Papaw know that he wasn’t much for sentimental language.  You didn’t often hear Papaw say the words “I Love You.”  But I never for a second felt anything short of absolute, unwavering love from the man.  You could see it in his eyes.  You could hear it in his stories.  For all of his tough, no-nonsense exterior, you could feel love just radiating from him.

I know many of you here today learned a lot from him too.  Papaw taught me a lot, but I pray that none of the lessons are over just yet.  I’m sure that there are lots of lessons that I don’t yet know that I’ve learned, but that I will one day realize that I learned from him.  So my challenge to you today is the same one that I give to myself: Let’s go out and make Papaw proud. 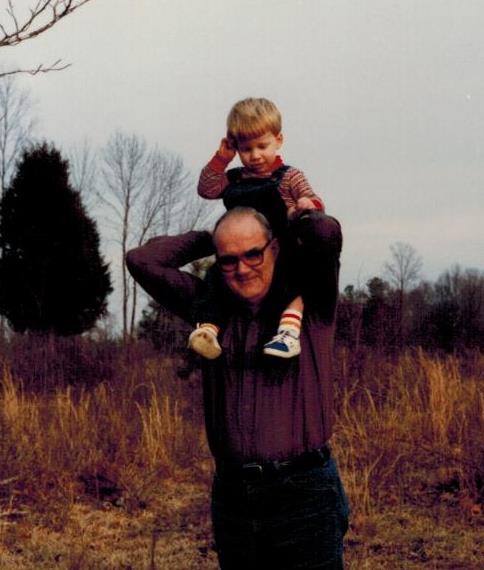