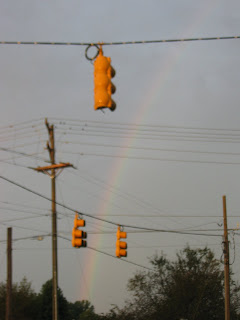 The beginning of school is always a little challenging for me. No matter how much I plan out and think things through in advance, there always seems to be a 2-3 week period where I work 60+ hours a week ending in exhaustion. I think I'm about half way through that time now. Somehow it's always worth it though, and I know that I'll emerge from this fog sometime in September and be ready to become human again.

Today was the first day with students. As I was driving to school at 6:45, it was drizzling and I was thinking about the potential of a rainy first day of school. I was repeating my mantra and asking God for strength and grace and love for this new group of kids. I was confessing my fears and anxieties and again pleading with God that this be the beginning to a better year. I turned the corner onto Harper Road and at the end of the street there was the most magnificent rainbow I have ever seen in my life. Usually rainbows are pretty and rare, but kind of faded and faint. This looked like a rainbow my students could have drawn. It was so vibrant and bold and bright; I could see every single color like it was straight out of the Crayola box. And it was so powerful. It was one of those few times in life when it feels like God just steps out of his ethereal world and allows himself to be among us in a tangible way. It was as if I could hear him speaking to me and saying, "Remember my promise? It won't rain forever. You won't have that flood from last year again. There may be challenges, you may have rain on the first day of school, but I have promised to never let you drown. Rest in my hope and peace." And I did. I drove another mile or so before I got to a stoplight and could dig out my camera and take a picture. By then, the rainbow had already faded from its initial glory. And it seems a photo can never really catch the beauty of a rainbow very well anyways. But I'm posting the picture so you can see it. I'm going to print it too and put it by my desk at school. It will be a reminder.

I'm also posting some photos of my classroom. I've worked hard on it and I want someone other than my students' parents to see it. We've gone with a new theme this year: Hardy's Honeys. So it's all bees and hives and quite frankly, it's super cute. Hope you enjoy.


*** Note: I can't figure out how to post more than one photo per posting. So, if want to see my classroom pics you'll have to go to our Smugmug site. (The link is to the left). I'll post classroom photos there under the category "Children."
Posted by Chrissy at 8:31 PM