I so often find that my reaction to events is a result of my expectations, realized or not.  I was fully prepared for a difficult recovery from this surgery, a full week in the hospital, and Clara experiencing significant levels of pain.  Then yesterday, when we found that such a huge portion of the procedure was done laparoscopically, I think I unknowingly altered my expectations into thinking that recovery would be a breeze, that our hospitalization would be brief, and that her pain would be significantly diminished.  I do think that she's doing better than she would have if she had been fully opened, but last night and today were not easy.

Her pain has hovered at an 8+ for much of the day.  She has received IV morphine as frequently as every hour and a half and has still been hurting.  She's also getting toradol every six hours.  Because it hurts her to cry, when she is in  pain, her face just twists in silent agony and she holds her breath.  That then makes her oxygen levels drop further and alarms sound.  Her breathing has been shallow and she has required nasal cannulas with additional oxygen support for most of the day.  We had hoped that she would get out of bed today, and maybe even take a few steps, but she was barely able to sit up in bed, assisted, for the five seconds that it took to move cords and replace bedding.  Even though the surgery was laparoscopic there are four pretty significant incisions PLUS her entire scar revision which is a lot of cutting on a tiny person. (See photos below).  Recovery is just hard.  She is hurting and she is confused and sad about it.

I do believe that she is making some progress.  The nausea and vomitting that were so disruptive last night have stopped and while she has not consumed much quantity of food, she has been able to eat some today.  She is peeing which is good and important.  The labs they did from last night's bloodwork looked good.  There are some steps in the right direction, for sure.  But it feels like we have a long way still to go.

She's still receiving lots of IV fluids and all of her meds are IV too.  In order to get her IV out she must be eating and drinking enough to stay hydrated and to be able to take her meds orally.

She is requiring oxygen support right now which doesn't seem to be bothering the physicians, but is something we definitely want to start moving away from.  Her diaphragm is likely very sore and contibuting to her shallow breathing.  It seems likely that she has formed some atelectosis since she has not really been able to get up and about and is avoiding coughing due to pain.  That is probably contibuting to her lower sats.  She's also had tons of morphine and that can lower sats too.  As I write this, she's sleeping with a liter and a half of O2 and is satting in the low 90s.  Just a little concerning for me.  I would love to see her require less oxygen tomorrow.

And of course, she needs to simply heal from the surgery and be able to get up and move and not need the level of pain management that we've had the  past 24 hours.    Her heart rate has been high all day and she's clearly just not feeling well.

So, we've made some baby steps, but still have a ways to go.  We know that the first 24 hours after surgery are the hardest, so I expect that we'll see her start to make progress on all fronts tomorrow and rally a little.  I really hope that we'll be able to get her eating more and get her out of bed some.  I'd love to see a few more smiles too.

Eloise had a fever for most of the day today.  She has been in excellent care with Mama K, but it broke my mama heart to know that my other baby was not feeling well either and I couldn't be with both at once.  Mama K and Robert took her to the pediatrician today who thinks that the fever is a reaction to the MMR vaccine she received about two weeks ago.  Some Motrin helped her feel better, and we are hoping that she'll be back to her smiley self again soon too.

I think we'll be here for several more days, but we are happy to be in such great care and to have support in other ways at home and with Eloise.  I have eaten well the past two nights, thanks to the generosity of church members and have received so many lovely notes and messages that have been a great source of encouragement.  Thank you.  Still no visitors please, until Clara gets a little stronger.

I'll try to update www.facebook.com/TheHardyLife throughout the day some tomorrow.  Thanks for your prayers.  We love you! 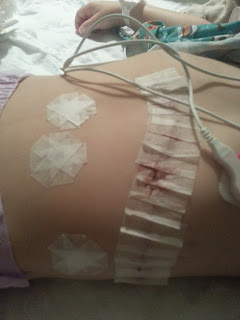 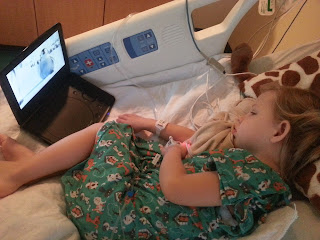 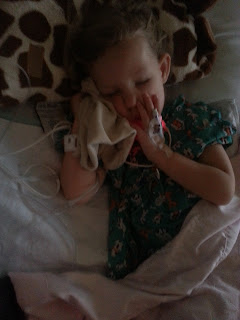 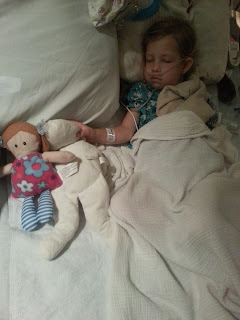