Nine months.  She's officially been on the outside longer than the inside (And just for the record; I much prefer her on the outside!).   This precious girl is keeping up with her big sister and delighting us all with her growing personality.  She's definitely 100% mobile now.... not just rolling, but scooching (spellcheck tells me this is not a word) where she wants to go with her own adorable army crawl.  I'm not sure that she'll ever really learn to crawl on all fours with her belly off the ground, but her own sweet little method isn't slowing her down.  As you can tell from these photos, it's getting really hard to photograph her with her little sign... she's on the go! 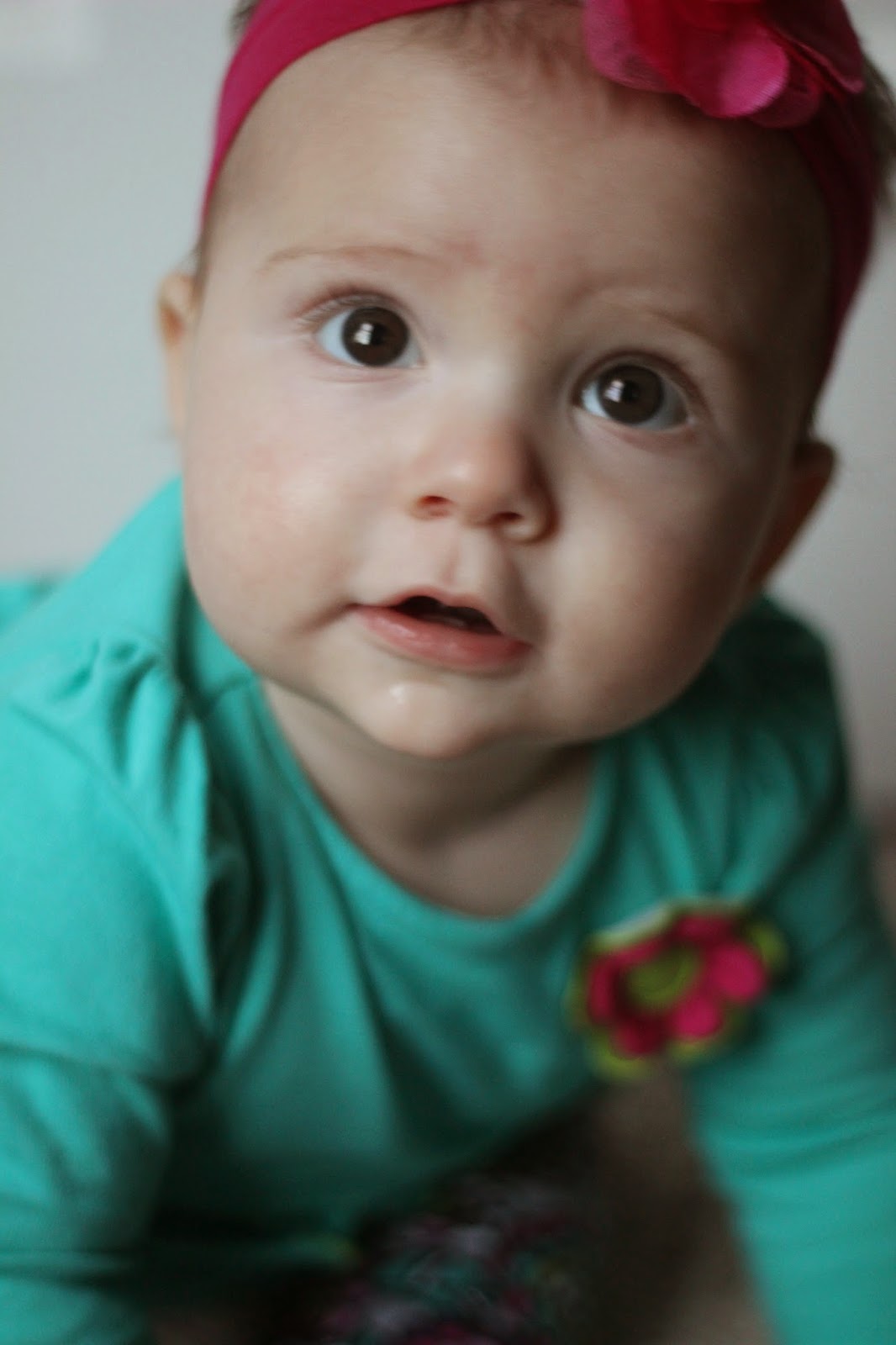 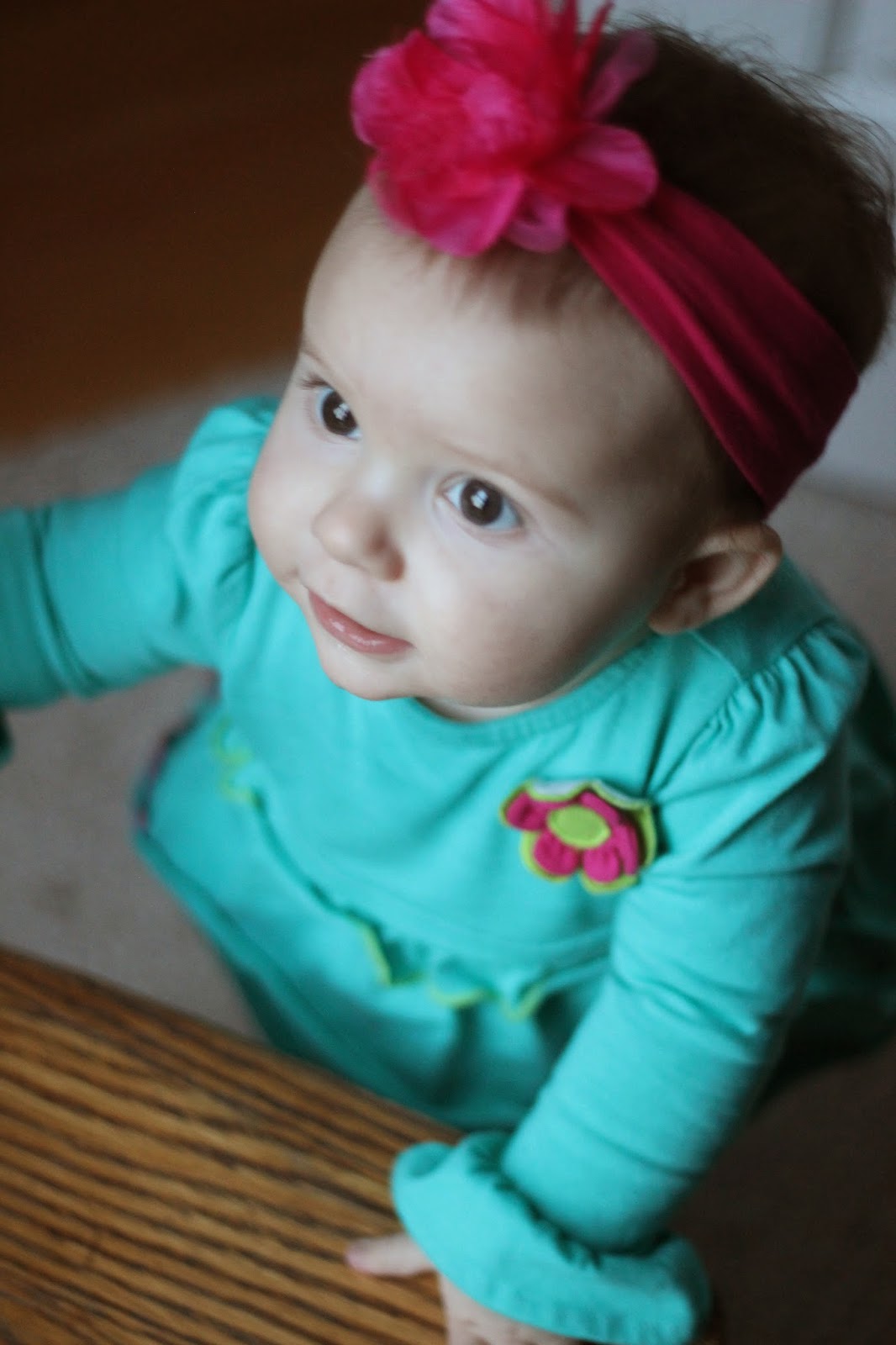 Her big happy grin lights up her whole face and reveals THREE teeth now.  The bottom right one came in on February 21, a day after she hit the nine month mark. We can tell that she's working on all four top ones too. 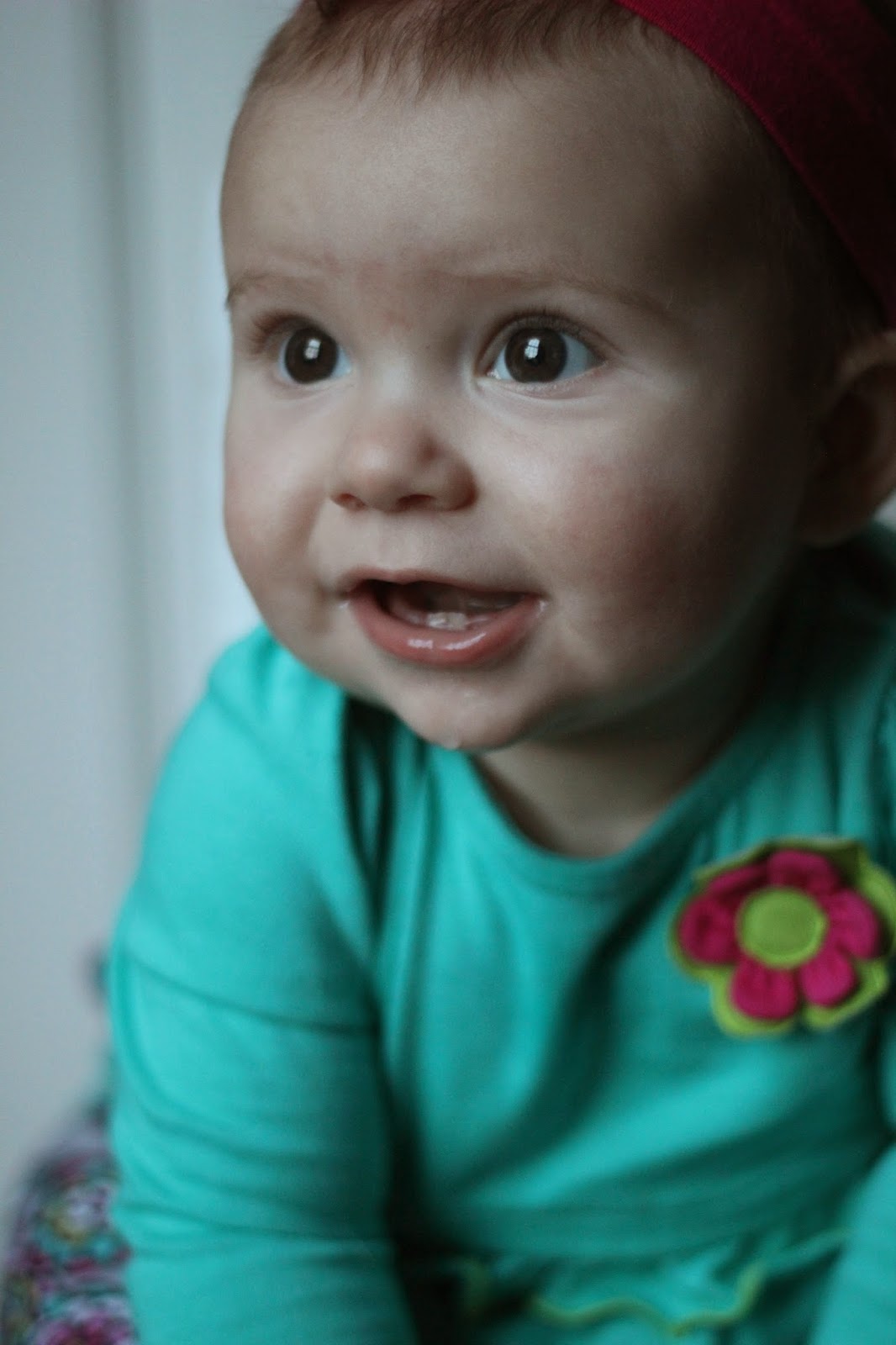 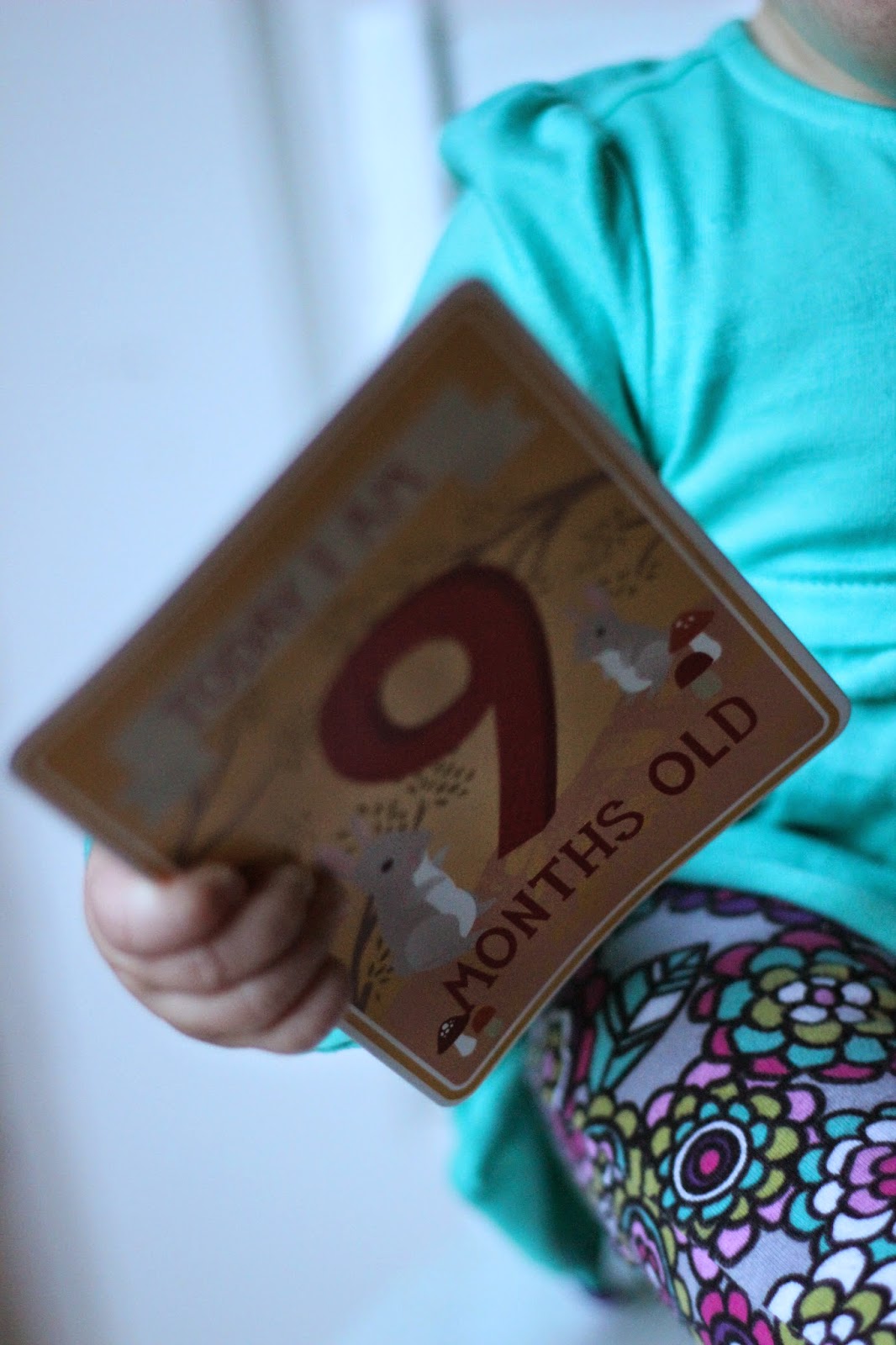 Those three teeth are eating everything in sight.  No purees, of course, but this girl will put away whatever meal the grownups are eating.  Spaghetti, chicken pie, soups, casseroles, pizza, fruits and veggies and MEAT.  I know she eats a better variety than her sister... some meals she eats more quantity too! 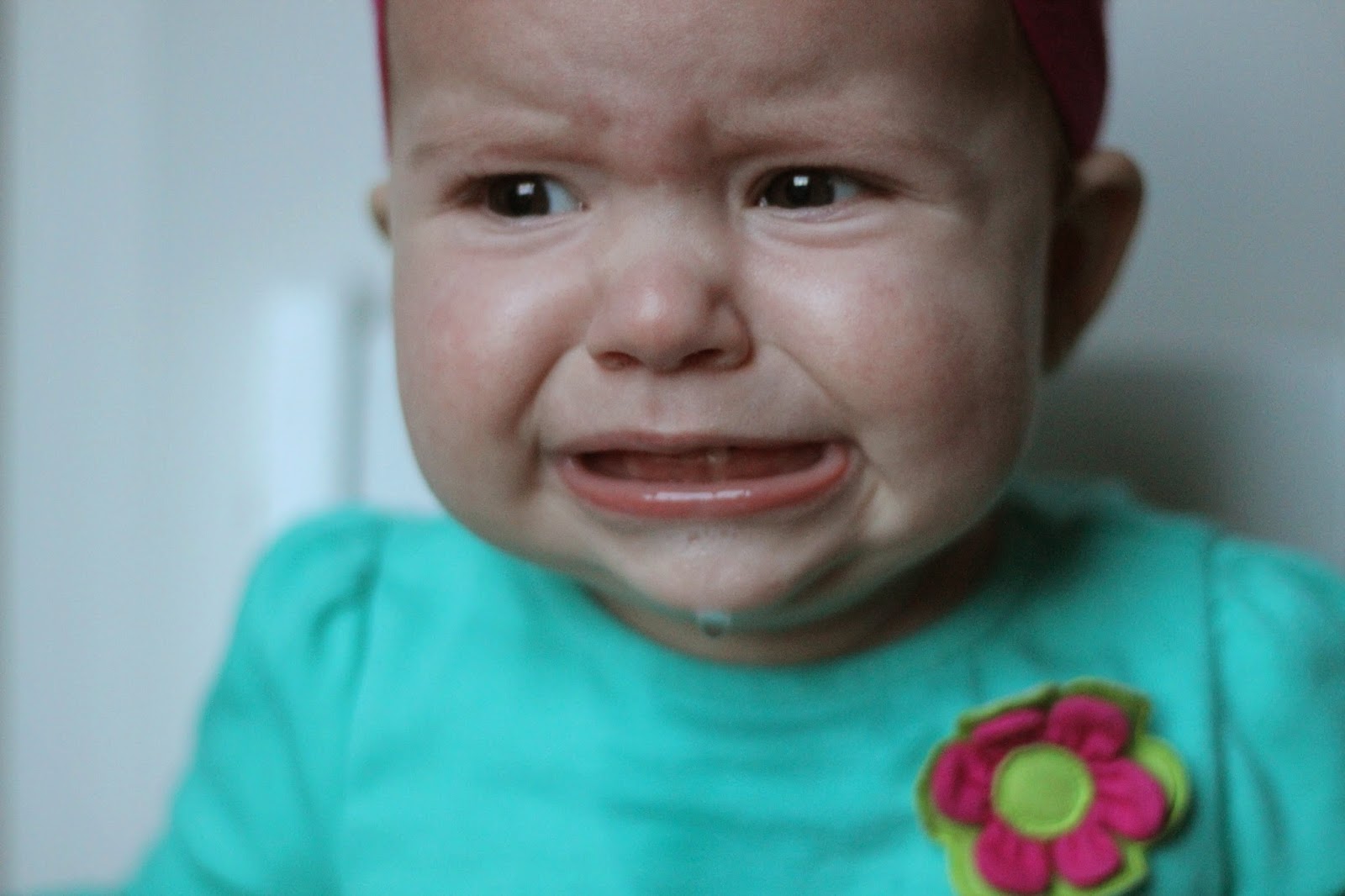 See that drool from her tooth poking through?  That photo shoot didn't last too long.  Let's try again a couple days later here.... 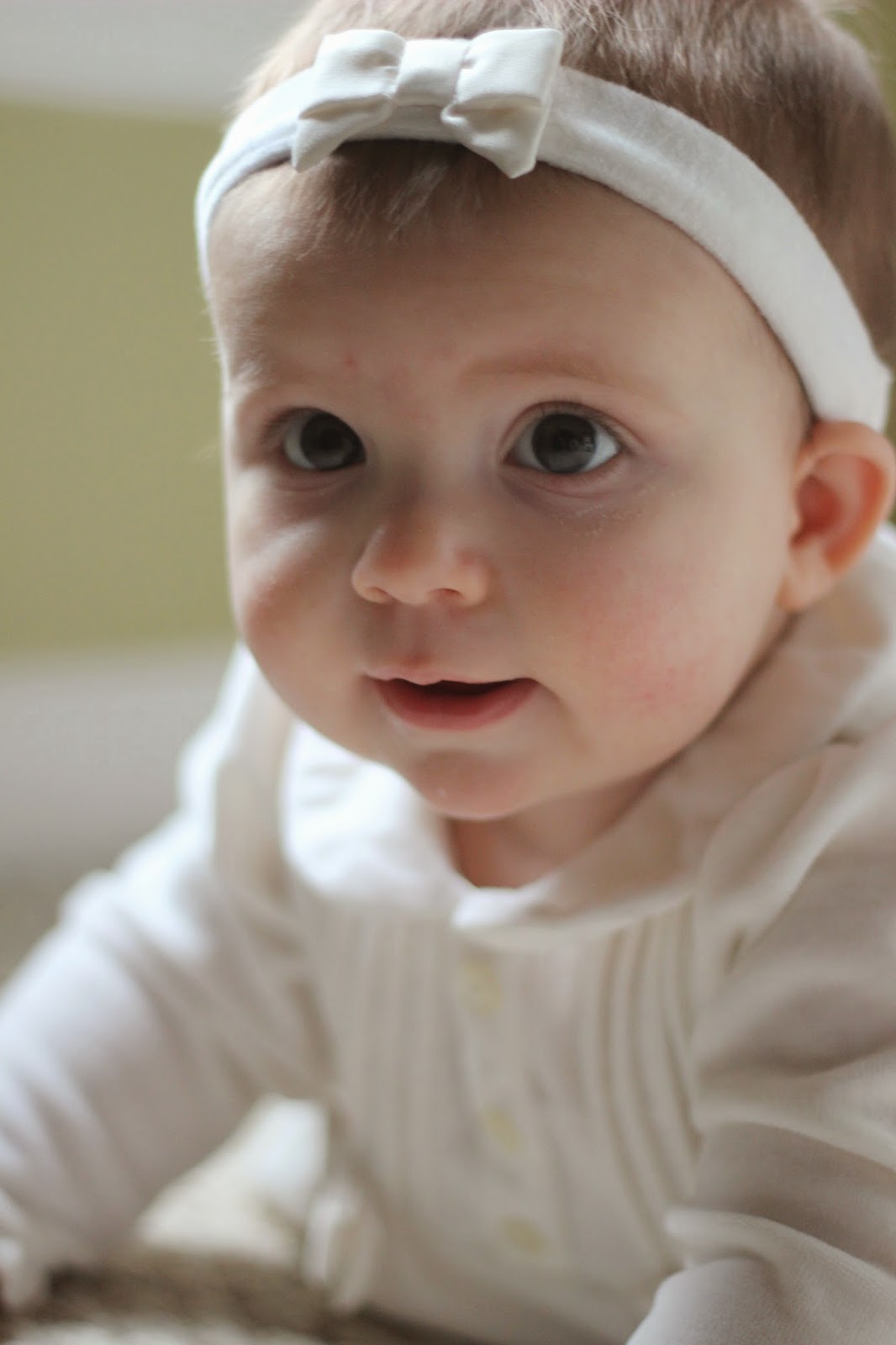 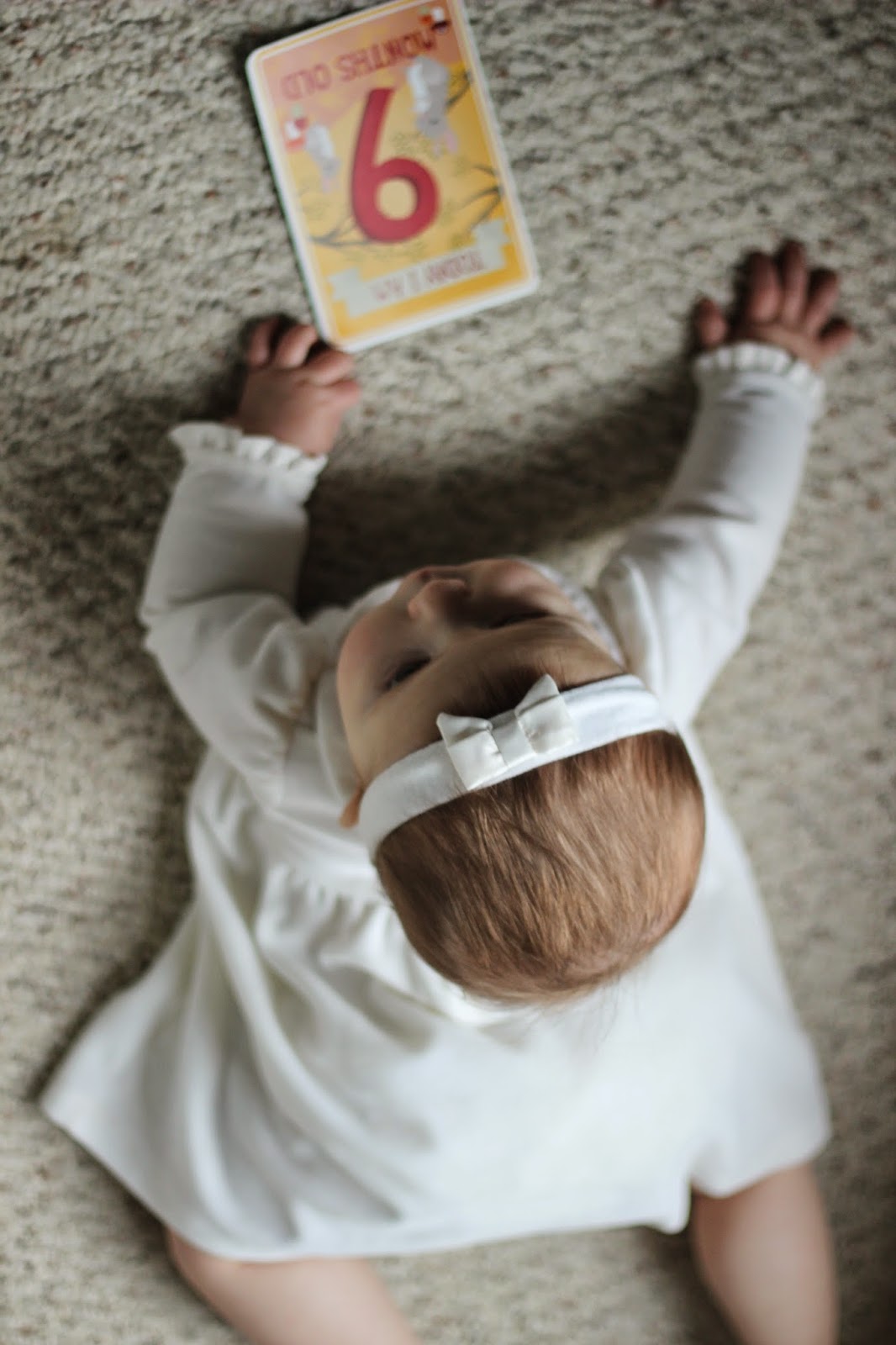 She is alert and curious, always taking in everything around her.  I sure wish I knew what was going on in her little brain because you can certainly see the wheels are always turning.  She loves rhymes and bouncing (Ride a horsey, ride a horsey is a bit hit right now) 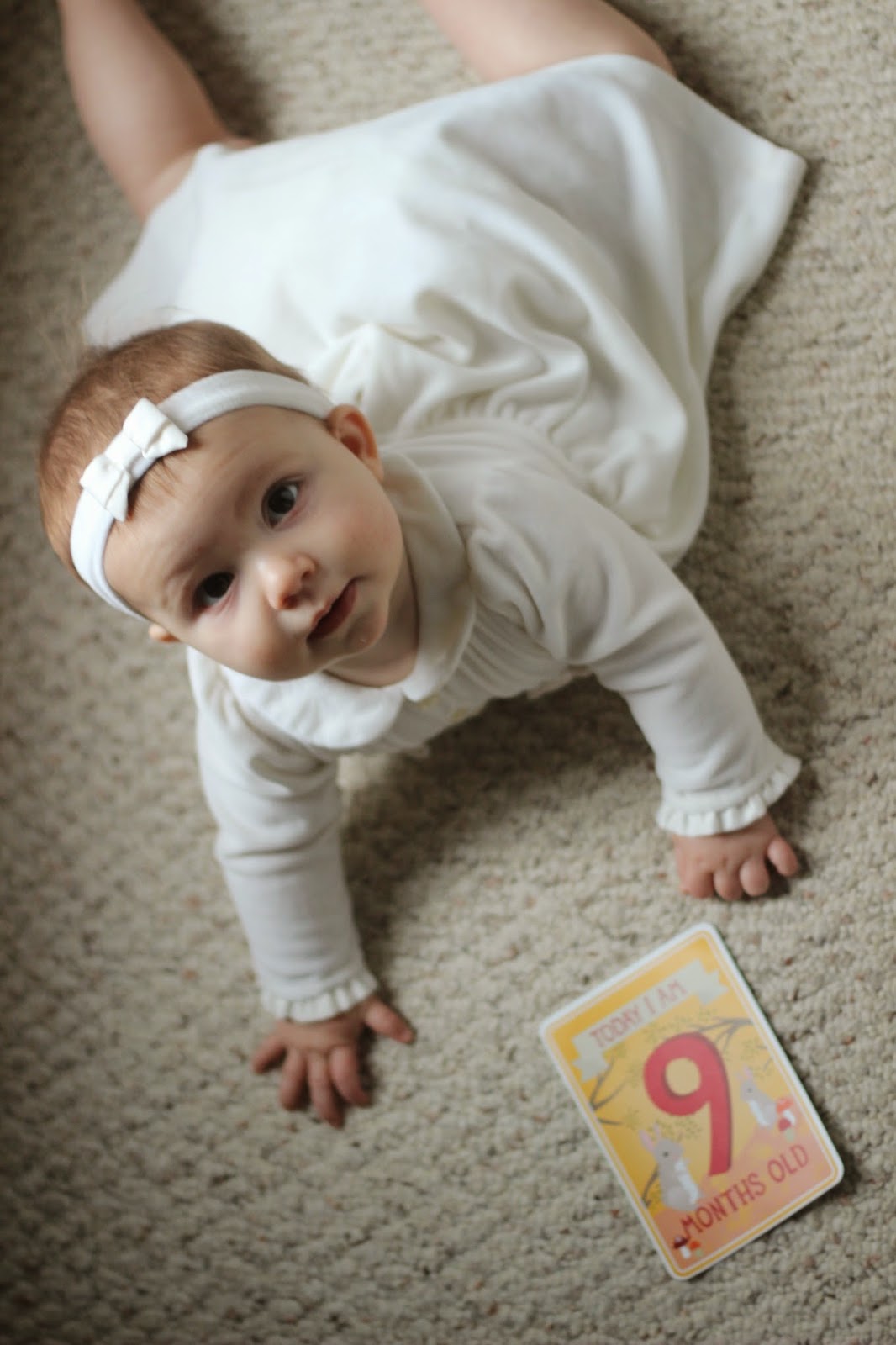 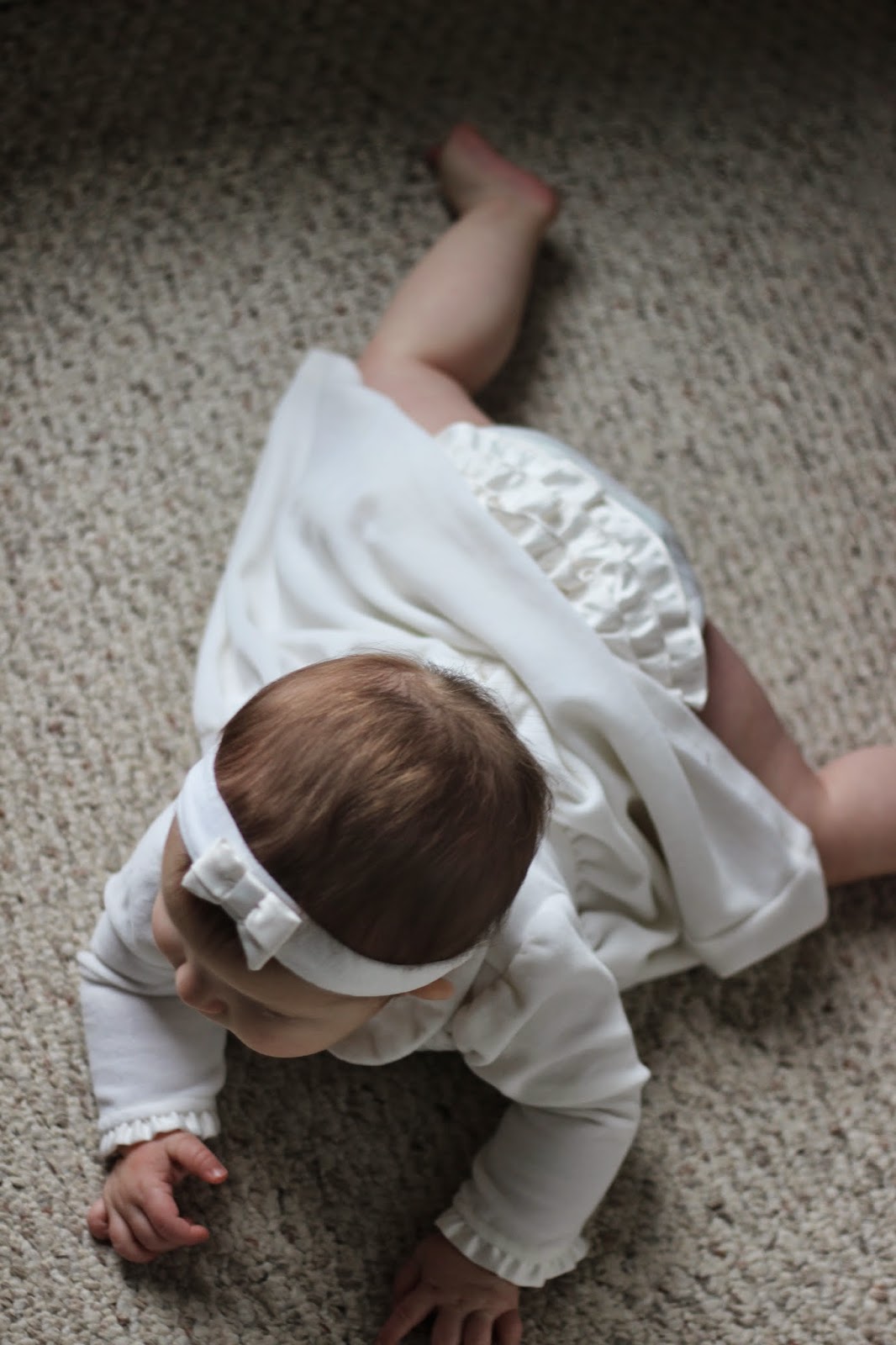 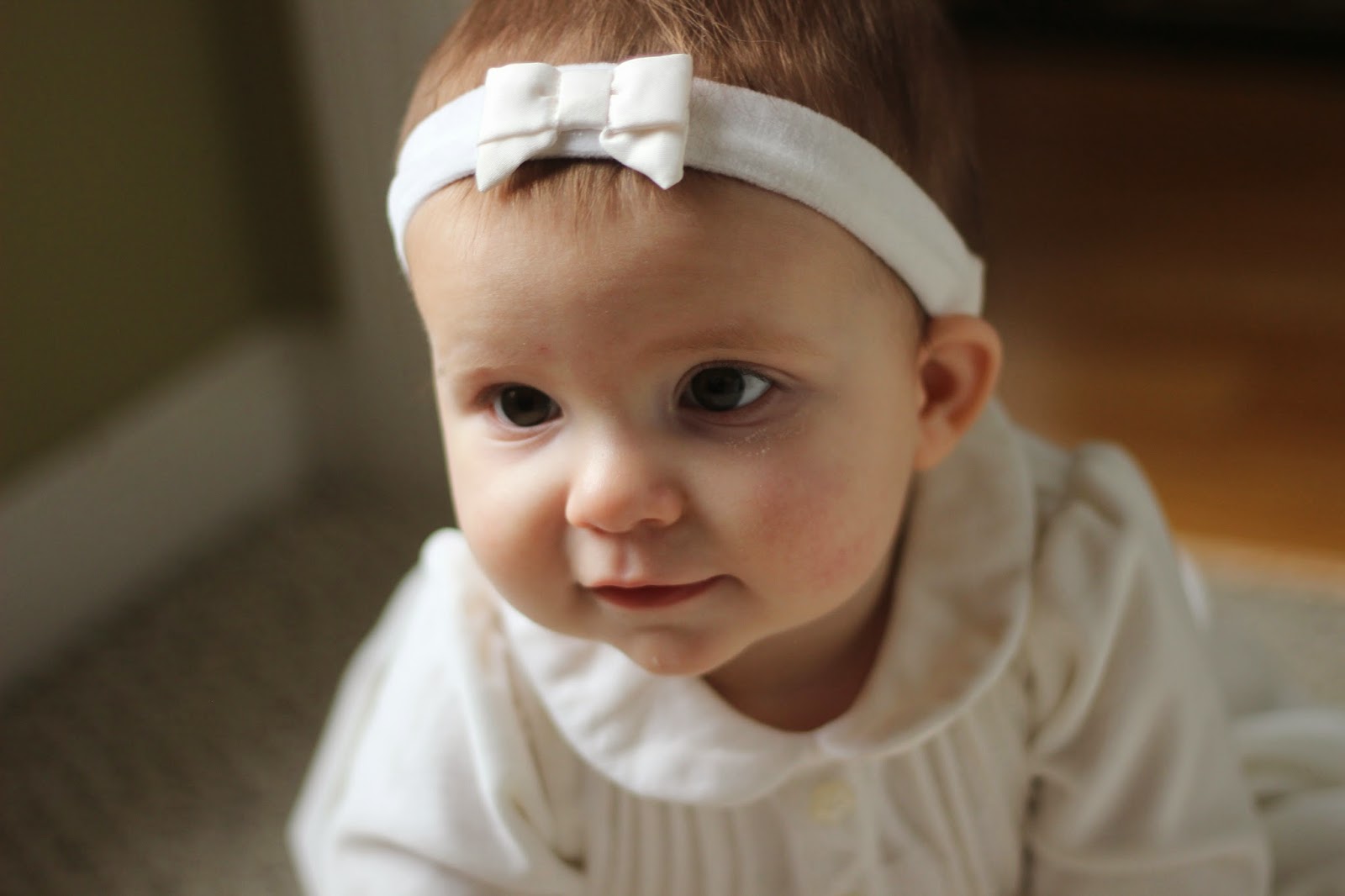 She is babbling up a storm.  We haven't a clue what she's saying, but she never stops saying it.  The little sounds she makes are hilarious.  She will wave bye-bye and clap her hands and do the sign for "all done" (still working on the others).  She blows raspberries and makes clicking sounds with her tongue.  She laughs at Clara and looks at her with a love and adoration that neither photos or words could come close to capturing. 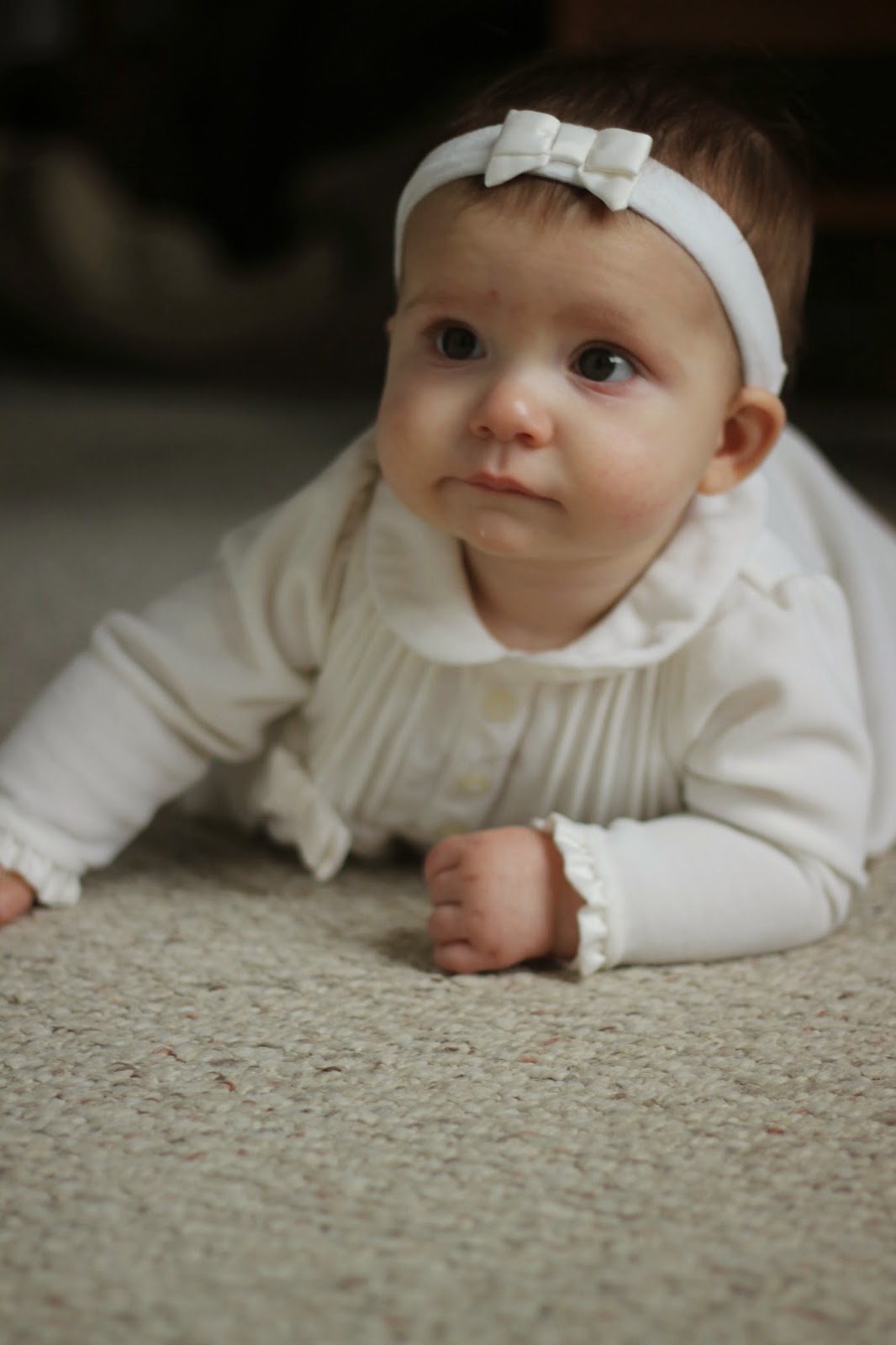 She takes two great naps consistently (about an hour and a half each!), although she really prefers that those happen in her crib now.... not quite as good at napping on the go as she was when she was teeny.  Her nighttime sleep is also.... improving.... overall.  Although I'm afraid to type that out for fear I'll jinx it.  We've had some good stretches lately.  Perhaps she'll soon be sleeping as well at night as she does during the day. 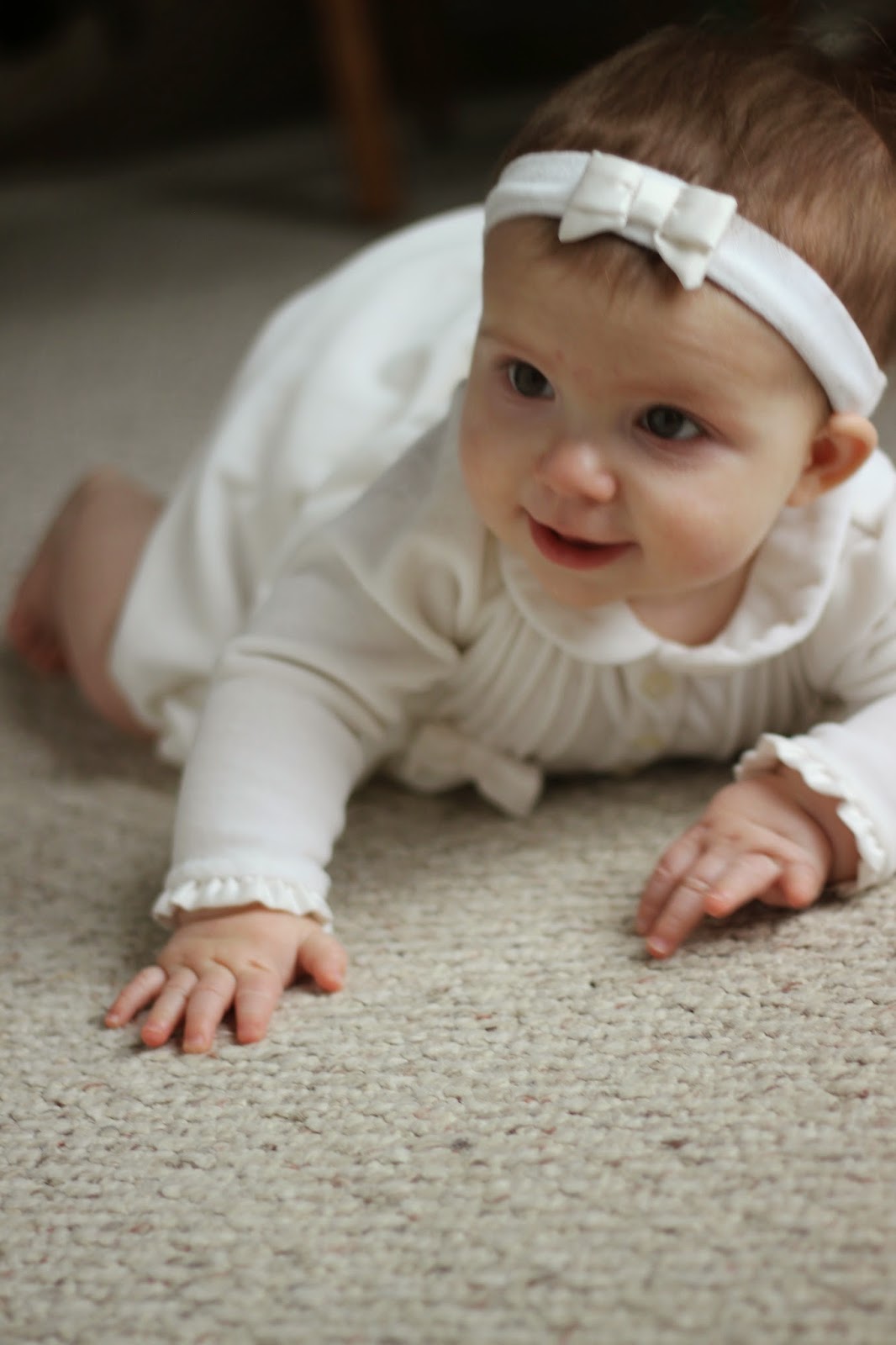 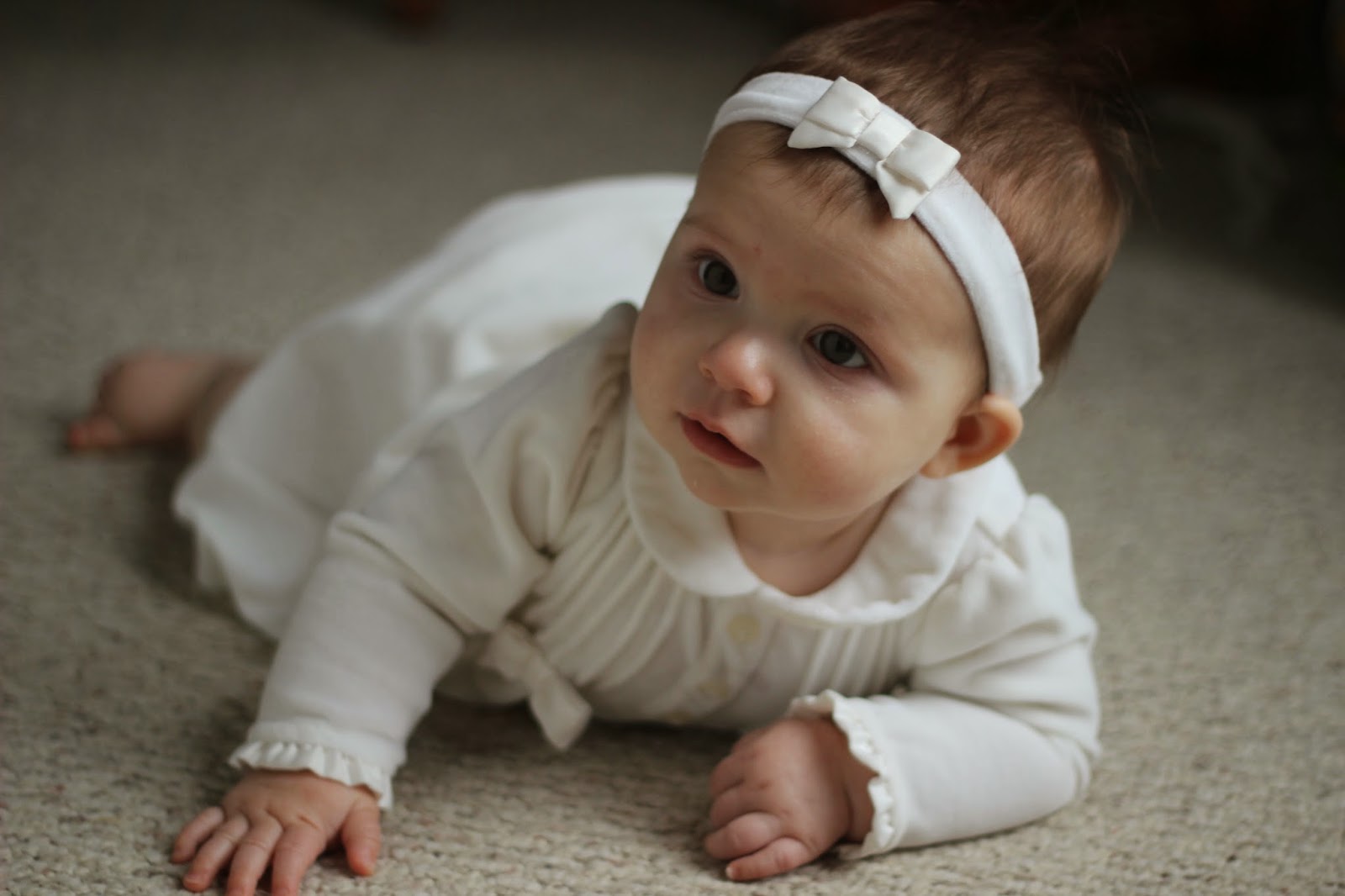 She loves her bouncer and rides happily in the stroller.  Bathtime remains her favorite part of the day and she kicks and splashes up a storm.  Most nights she gets a bath with Clara now and they both love playing together in the water.  She'll stand supported if we put here there, though she isn't quite pulling up on her own yet.  She does, however, pull hair.  Mama has a constant ponytail and Daddy has had some painful chest hair encounters. 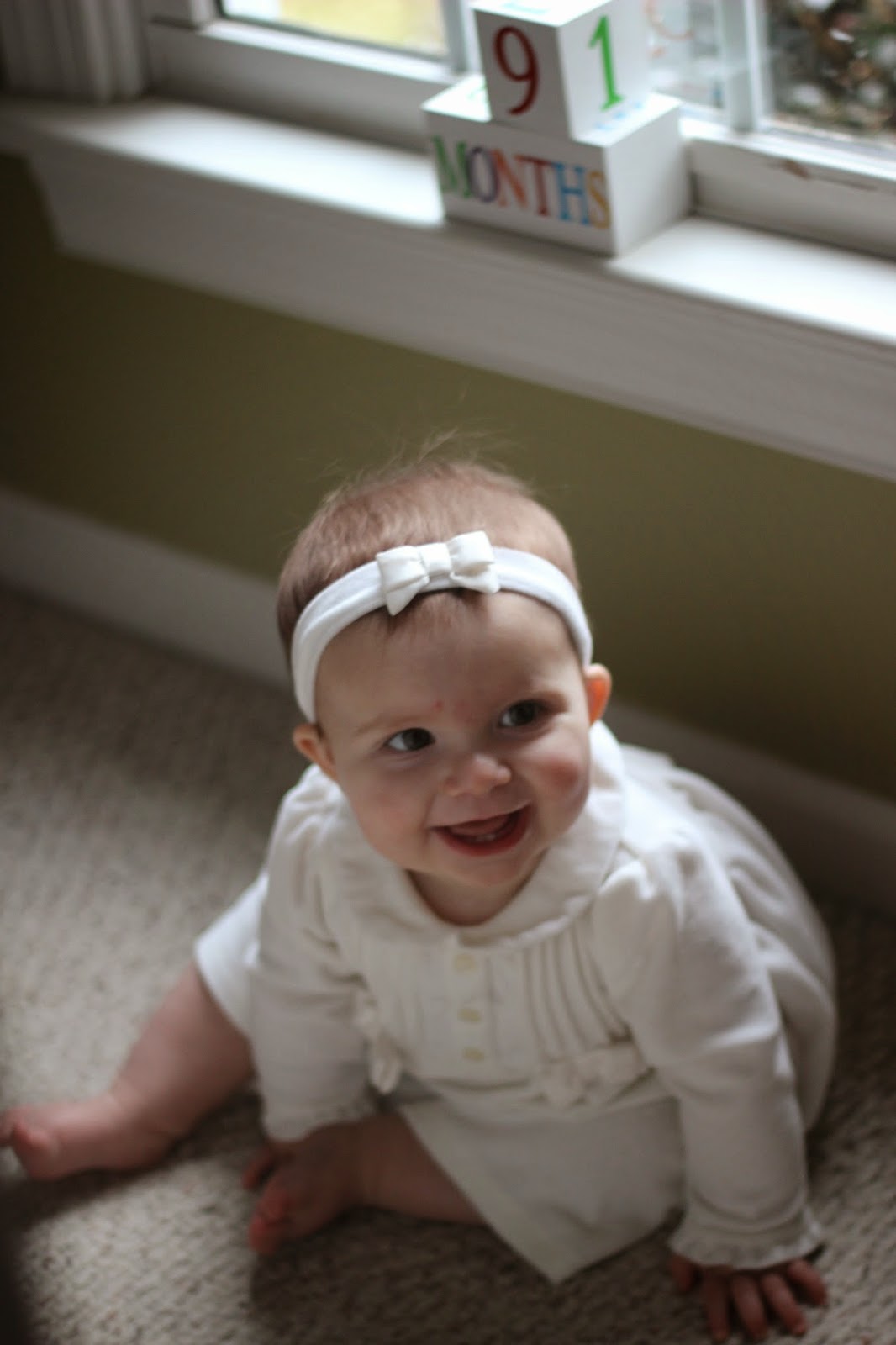 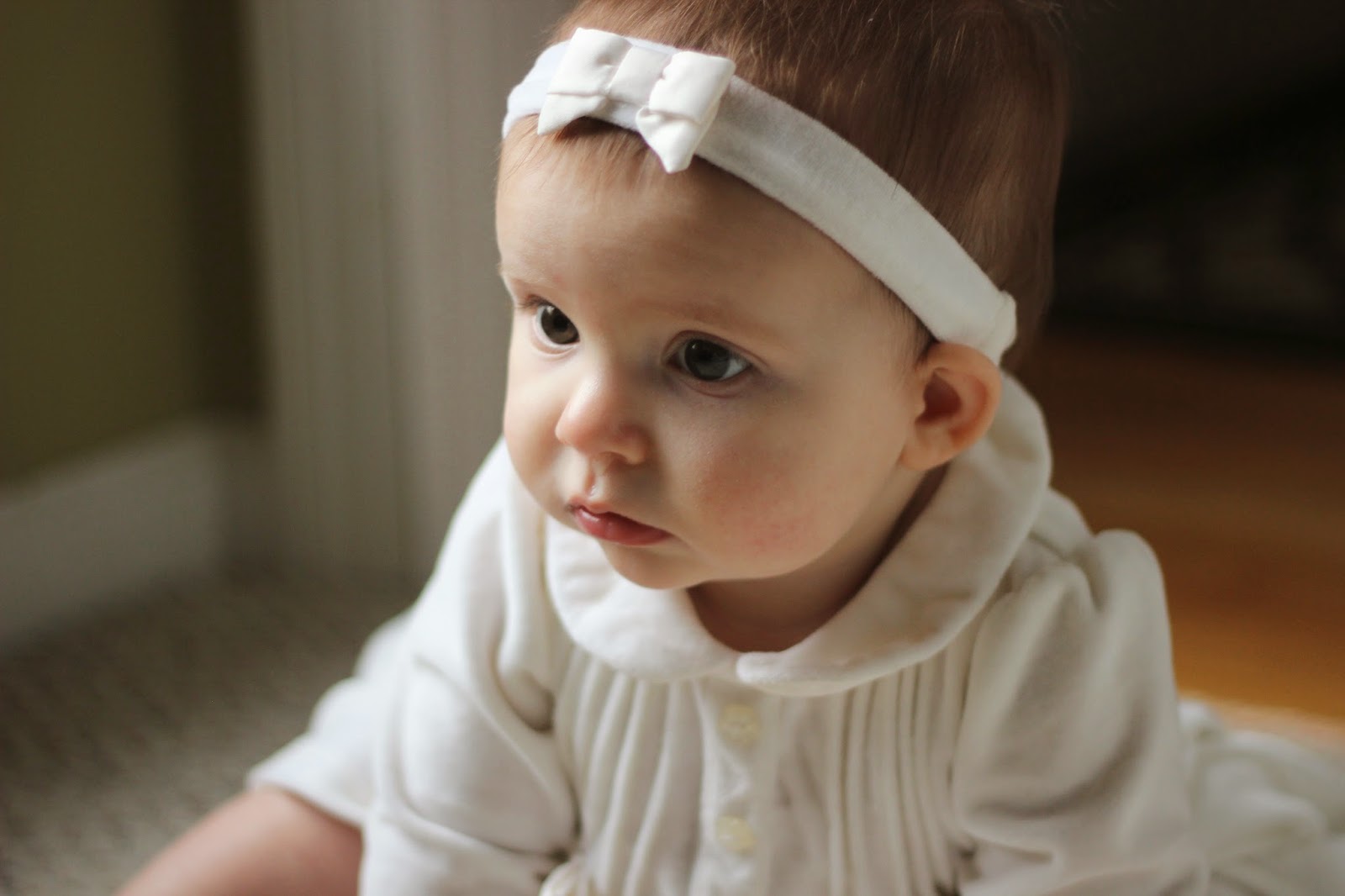 She might love Mama best, but she's still happy and willing to be passed around to just about anyone, and she is certainly passed around a lot.  On Sundays she comes back to me smelling like a mixture of a dozen people's perfumes.  She loves to be held, by whoever is willing to do it.  At her nine month checkup, she tipped the scales at 20 pounds and a little change, so whoever is holding her better have a strong back!  Those rolls aren't light.  We've endured a couple of nursing strikes and she's still hanging in with me.  I don't know that she'll nurse quite as long as Clara did, but since she's likely my last I'll be trying to go as long as she's interested.  I love our quiet snuggle times, even if it's just a few times a day now. 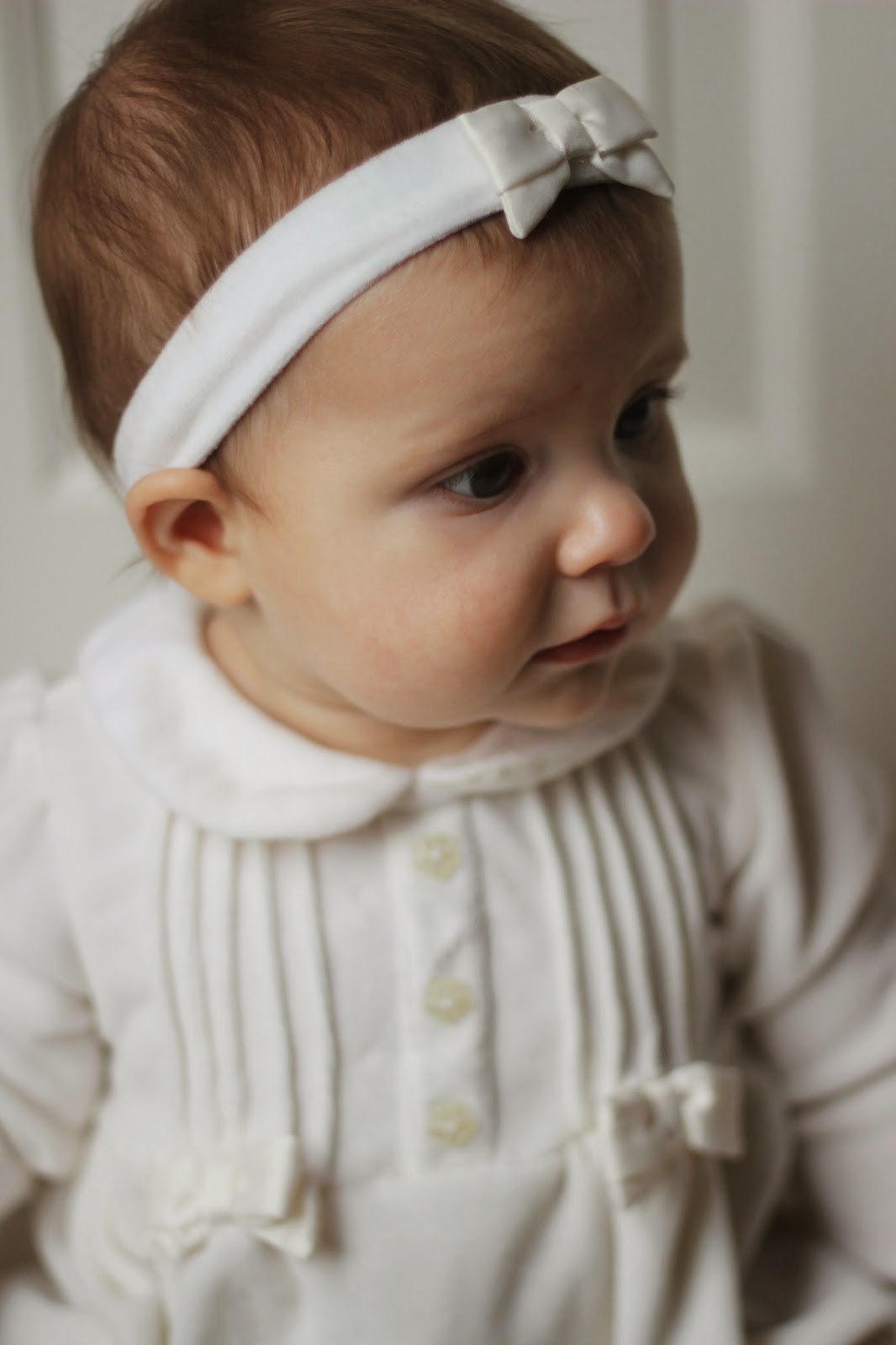 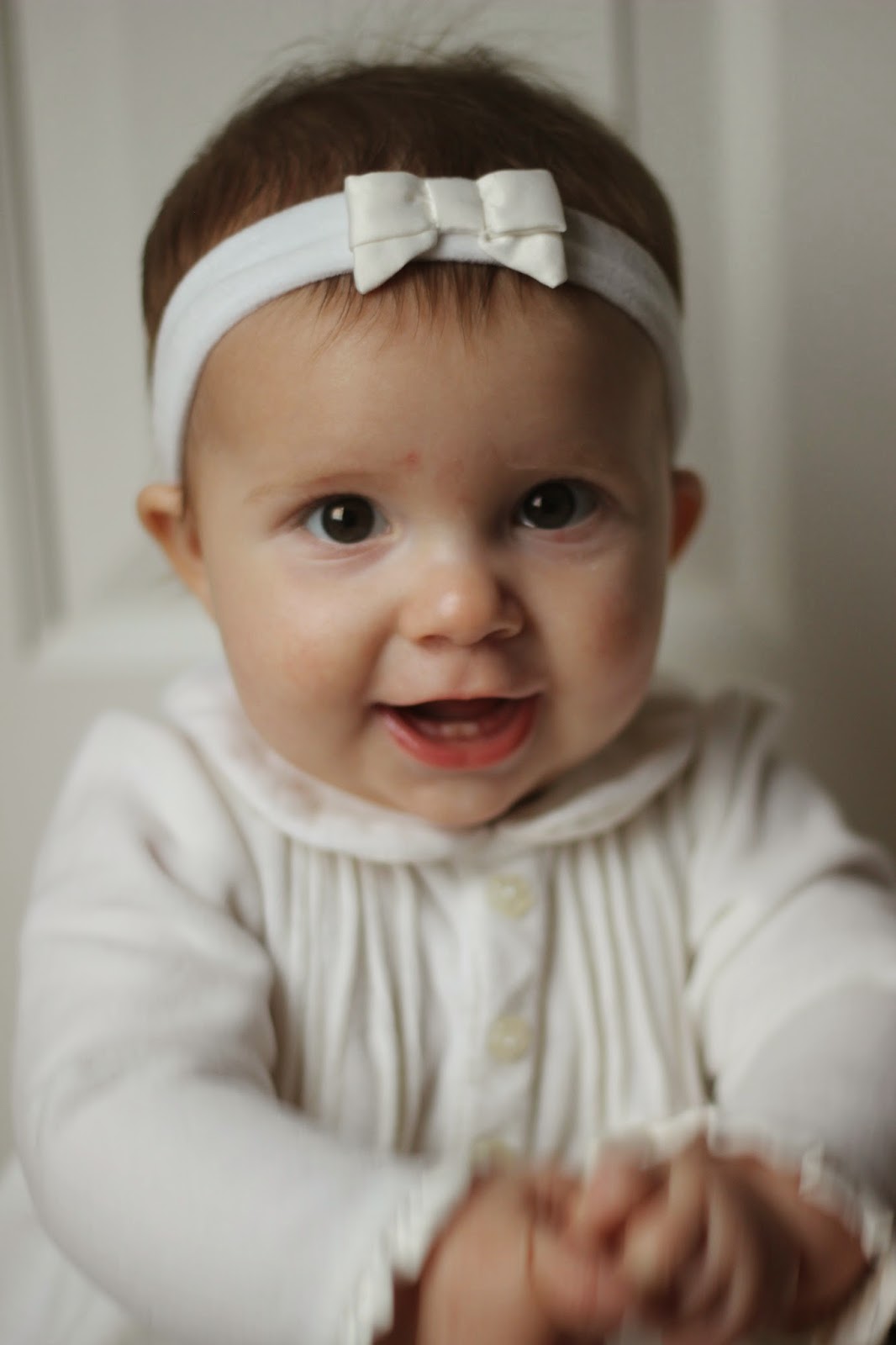 Eloise, you are my little sidekick and I love you more than you could ever imagine.  Nine months looks good on you, sweet baby.