To God Be The Glory

What a day of emotions!  We were anxious and worried about Clara as we arrived at the hospital early this morning and at the same time felt calm and confident in the surgeons' ability to fix her today.  We have been so overwhelmed and honored with the flood of prayers that have come in for Clara throughout the day and have found ourselves wondering again and again how we have been so blessed.  The right doctors, the right community, the right family, the right baby.  So much is right.  We waited for about two and half hours while the surgery was completed and when the surgical team came out to tell us everything went okay we immediately felt a rush of relief and excitement and renewed hope.  A lot of emotions, huh?

Here's the medical stuff:  Clara's surgery was a success.  They were able to repair the diaphragm with a smaller patch than expected because there was more diaphragmatic tissue than they predicted and they were able to sew muscle to muscle on the side closest to her esophagus.  They did still put a gortex patch on the other side.  They were able to fit all of her organs back into her abdomen where they belong and stitch her up again without using a silo.  (One thing they did to help make this happen was "milk" her bowel of all its stool so it would be empty and smaller.  Isn't modern medicine incredible?)  We were all very relieved to hear this bit of news.  Her belly is firm, but not too tight.  We should see it begin to soften over the next 8-12 hours.  Her spleen, colon and intestine were all above the diaphragm, but the liver was below.  Her left lung looked normal - it's very small, but it did not appear collapsed or damaged which is great news.  Since the hernia was on the left side and that's where they did surgery, they didn't see the right lung during surgery.  We're still assuming that it is full-sized.  There were no problems with the ECMO circuit or with bleeding during the surgery.  They have done a chest x-ray to determine the placement of the tubes and cannulas post-surgery since now that things have moved around they could have shifted too.  More on that in a moment.  Her appendix is in an abnormal position, but that is okay.  He did not remove it.  Her stats stayed stable during surgery.  Her esophagus is in the right place and is a normal length.  Clara will take a little hit physiologically from surgery so the next few days are critical for her to return to square one and be able to begin focusing on weaning from ECMO.  Dr. Turner was also able to give us results from yesterday's echocardiogram which we did not have until today. It showed that her right ventricular pressure was much improved (down to 45 from 58.)

This afternoon after surgery Clara hit her first speed bump.  We were expecting these over the next few days, but it's still hard to hear news about setbacks when we had so many stable "boring" days before surgery.  She had a heart arrhythmia around 2:00, meaning that her heart started beating too quickly.  The first time they gave her a drug called adenosine to correct things and she recovered.  Then, she slipped into arrhythmia again and they gave her another dose which also worked.  The third time her heart started racing the adenosine did not work and they had to shock her.  Since then, she's remained stable and regular.  As scary as this sounds, the doctors seemed calm and not too panicked about things.  They think that the arrhythmia was caused by the large catheters in her neck that run to her heart to keep the ECMO machine going (cannulas).  Since things have shifted on her inside now, they think these tubes were just off a little and were "tickling" her heart and causing this arrhythmia.  Dr. Turner, with the help of a cardiologist and an echocardiogram, adjusted the cannulas about 1 1/2 cm.  They are watching now for recirculation issues which would cause her CO2 levels to rise too much.  If this occurs, they may have to re-adjust the cannulas again the other direction.  She is on some meds now to try to control the arrhythmia long term.  They have also given her some more blood and some more platelets because the echocardiogram showed that her heart was a little empty.  Her blood pressure and other stats besides the raised heart rate look good for now.  The latest chest x-ray seems to show that the cannulas can be adjusted a little more and Dr. Petty is on call tonight so he will probably do that.  They have also given her some insulin to manage blood sugar levels.   All of these small tweaks and adjustments are the kind of thing we were anticipating, but we are eager already to be on the other side of this surgical recovery so that we can start focusing on weaning off of ECMO and reducing pulmonary hypertension.

Just to give you an idea of what the surgery did today, here's a before and after chest x-ray: 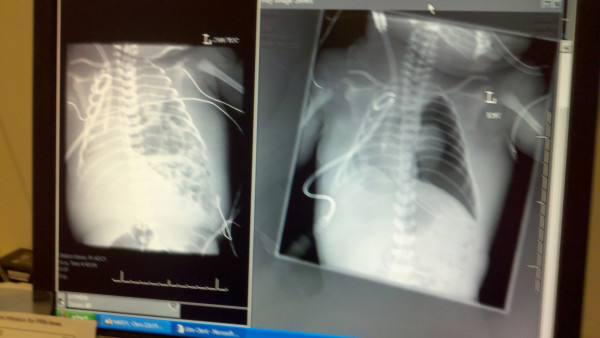 On the left you can see that her left side is full of lots of extra organs.  On the second x-ray, everything has been moved back down where it belongs and you can see her tiny left lung, surrounded by air/fluid in the space where her lung now needs to grow!

Here's a picture of Clara's incision post-surgery.  We can't wait to teach Clara to be so proud of her scar and all that it means.  It will always be a beautiful reminder. 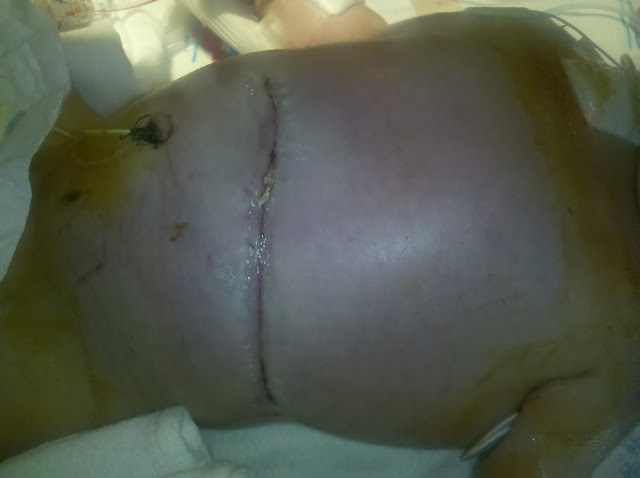 Today was a powerful experience of community for us.  Nearly 200 people signed up for a specific time slot to pray for Clara throughout the day and countless others told us you would be praying throughout the day.  We know that many were wearing turquoise today in honor of Clara and other CDH babies and you have flooded our inboxes with words of love, encouragement and prayers.  I can't believe how many people have rallied behind us and Clara and how the Lord has used this story to touch the hearts of people and move you all into action.  We believe with every ounce of our being that it is your prayers that allowed for today's surgery to be such a success.  It is a testament to the power of prayer and we hope that you have been moved as we have by this truth.  It is times like these that we find ourselves on bended knee, but it is a powerful reminder of what kind of prayer lives we want to always strive for, even in the midst of good times.  We cannot say it enough.  Thank you for your love, support and prayers.

So, in closing tonight - we are grateful.  We are praising God for this important step along the journey for Clara and we want to make it clear that although we are thankful for the surgeons, appreciative of the medical staff and technology, and amazed by the procedures that can be performed, the glory all belongs to God.  He alone is the Great Healer.

Here are some Scriptures that especially resonated with me as we prayed in thanksgiving today:

When I said, "My foot is slipping,"
your love, O Lord, supported me.
When anxiety was great within me,
your consolation brought joy to my soul.
Psalm 94:18-19 NIV

Shout for joy to God, all the earth;
sing the glory of his name;
give to him glorious praise!
Say to God, "How awesome are your deeds."
Psalm 66:1-3 ESV

Rejoice in the Lord always, again I will say, rejoice!... Be anxious for nothing, but in everything by prayer and supplication with thanksgiving let your requests be made known to God.  And the peace of God, which surpasses all comprehension, will guard your hearts and your minds in Christ Jesus.  Philipians 4:4, 6-7 NASB


Now to Him who is able to do far more abundantly than all we ask or think, according to the power at work within us, to him be glory in the church and in Christ Jesus throughout all generations, forever and ever.  Ephesians 3:20-21 ESV

You have turned for me my mourning into dancing;
You... have girded me with gladness,
That my soul may sing praise to You
and not be silent
O Lord my God, I will give thanks
to You forever.
Psalm 30:11-12 NASB

Keep praying.  Please.  Don't stop now.  And we will continue to give God all the glory.
Posted by Chrissy at 7:26 PM