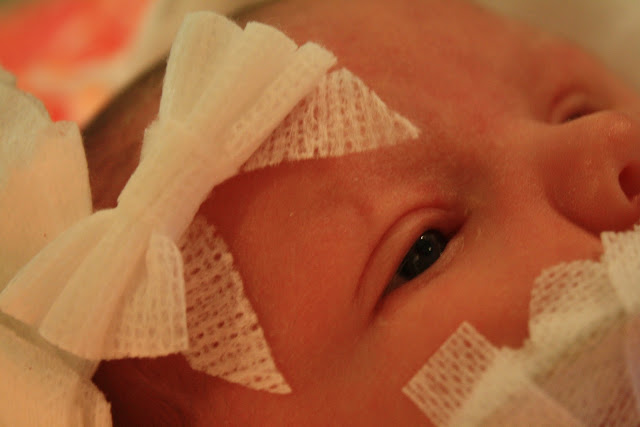 We also read books and sang songs today and I treasure each moment of my hand held inside of her tiny little fingers.  I’m so thankful that Clara is not a “touch-me-not” like some CDH babies and that I have the privilege and opportunity to spend these sacred moments with her each day.  I am thankful for my precious baby girl.
Thank you all for your continued prayers.  I know this was a dense update, full of medical jargon and explanations.  I felt a little heavy today after talking with Dr. Turner.  I’m so grateful that surgery is scheduled and remain optimistic for Clara.  But it was certainly a reality check for me that we do have a very sick little baby here.  The stability of the last few days has been an answered prayer and we are so grateful for the time of rest on ECMO.  However, after surgery we will need more than rest and stability; we will need to see our girl start to really fight for her life.
Things for you to pray for: Praise God for her continued success with small goals along the way like the reduced fluids and the shifting (maybe inflating?) left lung nubbin.  Please pray for her surgery on Thursday.  Pray for the team who will be operating on her and for no complications from the surgery.  Pray that it is as simple as possible – that perhaps no patch will be needed and that her organs will fit back inside her belly during this surgery so that a silo and a second surgery will not be necessary.  Pray that she will remain strong after surgery and that there will be no backsliding or if there is that it would be minimal before she starts improving again.  Pray that she will be a fighter and that she will have a spirit of tenacity and a strong desire to fight for her life.  Pray that her left lung will gradually grow and inflate and that her pulmonary hypertension will resolve.  Pray for our family as we continue to try to listen and understand the doctors and as we pace ourselves for this long road ahead.
We truly believe that the thousands of focused prayers on the day of her birth were behind her successful entrance into this world and that your continued prayers in the days since have been what has kept her safe and stable while on ECMO.  Don’t stop now!  We’re looking into setting up another intercessory prayer webpage to allow you an opportunity to sign up again for a slot of time to specifically pray for Clara on Thursday.  Stay tuned for that.
Also, I want to mention that Thursday (March 31) is National CDH Awareness Day.  We think it is no coincidence that the day Clara will have her operation is a day that CDH families across the country are trying to help raise awareness about this birth defect that affects so many children (1 in 2500), has such low survival rates (nationally only about 50%), is as common as spina bifida and cystic fibrosis, but that very few have heard of.  We hope that Clara’s story has helped to spread the word about CDH.  In her support (and in support of all CDH babies), national CDH organizations are asking people to wear turquoise on Thursday and help spread the word about CDH.
"But they that wait upon the Lord shall renew their strength; they shall mount up with wings as eagles; they shall run, and not be weary, and they shall walk and not faint." (Isaiah 40:31)
"For I will restore health unto you, and I will heal you of your wounds, says the Lord."
(Jeremiah 30:17)
"Behold, I will bring you health and cure, and I will cure you, and will reveal unto you the abundance of peace and truth."  (Jeremiah 33:6)
Posted by Chrissy at 10:02 PM