The Gift of Family

We’ve just returned from a family reunion in Elberton to celebrate Daddy Hardy’s 95th birthday. Reaching the age of 95 is a pretty remarkable feat in the first place, but what took place in the pasture in front of Bob and Karen’s house when family traveled a collective 10,000 miles to be together was even more incredible.

I love my family. Unfortunately, my grandparents all died when I was fairly young and while our immediate family is close and enjoys traveling together and sharing holidays and other occasions with each other, our extended family has never really been close. Marrying into the Hardy family has been full of many blessings, but one of the greatest things that Robert has given me by inviting me into this family is the gift of grandparents, cousins, aunts and uncles like I have never known.

This is a gathering of four generations. During the day on Saturday there are people going off in small groups for jogs or perfecting cannon-balls off the diving board at Daddy Hardy’s Swimming Hole. Some folks chose to swim in the lake while others hit J.C. Pool Co to acquire a new fall wardrobe. There are board games being played inside, bocce and frisbee in the yard, stray dogs wandering up to the house, children laughing and running and other children hot, tired, cranky and crying. Everyone chips in and helps out – no matter if it’s your kid or not. It is chaos and cacophony and pure bliss.

And there’s always food. Oh, is there food. Stuart and Marie bring pounds and pounds and pounds of fresh shrimp from the Coast. We feast on Mema and Papa’s fresh garden tomatoes, butter beans, okra and more. There’s tomato pie (who’s even heard of tomato pie?), and BBQ and slaw and salads and fresh corn on the cob. The hutch is the kitchen is covered with dozens of fresh Georgia peaches. And for dessert there’s blueberry cobbler, peach crisp and of course Karen’s homemade pound cake for Daddy Hardy’s birthday cake. This is a pretty amazing picture already. Thirty relatives getting together and really, truly, genuinely loving each other’s company. One cousin said during the weekend, “I would choose to spend time with these folks whether I was related to them or not.” Most families just don’t feel that way. But the most beautiful part of the evening was after we’d gorged ourselves on fresh produce and birthday cake and an informal toasting began.

Aunt Peen had spent a week earlier in the summer cleaning out Daddy Hardy’s attic and come across piles of old letters sent to Grandmother and Daddy Hardy over the years. The letters had been sorted and each of the three sons was given a bag of his family’s old news. People took turns reading the letters that had been written over the last fifty some years. With each word, a memory was dug up and appreciation, love and admiration was offered to Daddy Hardy. A few folks read some scripture – both some of Daddy Hardy’s favorite verses and some that just reminded us of the man he is and the remarkable job he did raising this family. We were celebrating Daddy Hardy and his life. We were recognizing how devoted he has always been to his faith, his community and especially to his family. We were acknowledging his legacy, but with it we were carrying on these memories and these values. It’s his story, but it’s a story that belongs to the whole family as we strive to follow in his example.

I watched some of the oldest children in the youngest generation and wondered if they had any idea of the significance of what they were participating in. I was soaking it up and delighting in it and not wanting any of it to end. It was one of those precious moments that you want to find some tangible way of capturing and holding on to. It’s one of those things you never want to forget. When Robert suggested that we all sing Happy Birthday one more time before turning in for the night, I started choking up. No one else seemed to be crying, why was I having such a hard time letting it end? These kinds of gatherings and reunions are normal to them – they’ve never known anything else. I hope they never have to.

Daddy Hardy always says, "If you give your life to the Lord at an early age, study his word, and follow his commandments, he will bless you with a loving family.".” He then says he “wouldn’t trade it for all of Solomon’s gold, wives and concubines.” Me neither, Daddy Hardy. Me neither. 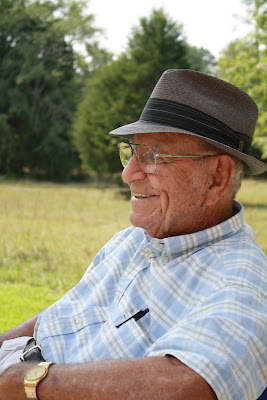 The man of the hour. His expression? Pure delight, as he's watching his family and soaking it in. 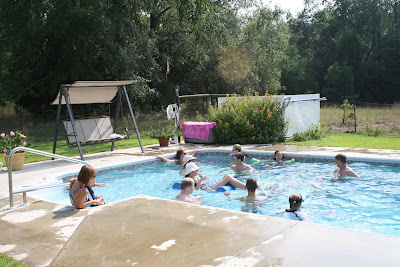 lots of family, swimming in the pool... 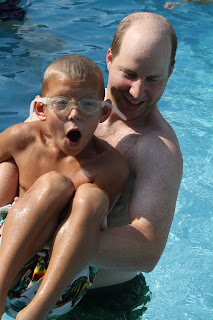 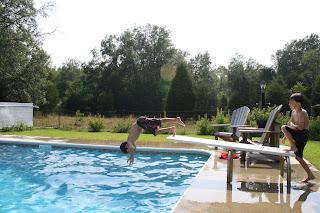 I can't resist mentioning that for this reunion, Bob and Karen borrowed a friend's RV, parked it in the driveway and used it to sleep all the relatives. How fabulous is that?? 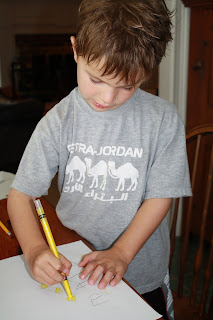 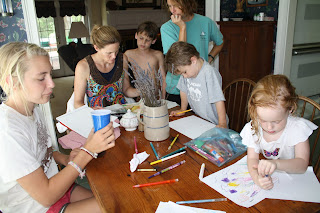 Did I mention the food? 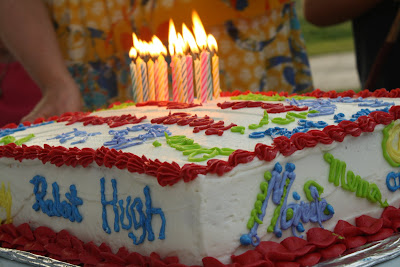 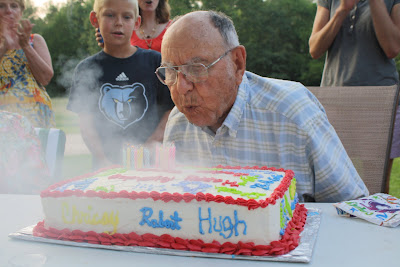 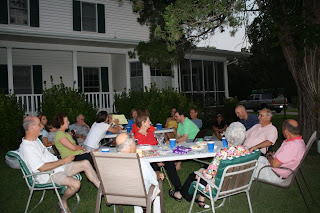 Bob reads the birthday letter he wrote to Daddy Hardy 20 years ago for his 75th Birthday. 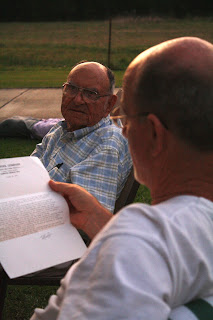 And Karen reads a letter even older than that, when Bob wrote asking for money for their honeymoon. 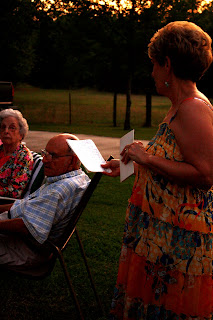 I am so proud to be a part of this family: 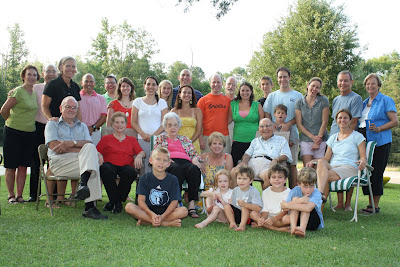